Shujaa to face off with Canada in Challenge Trophy quarters 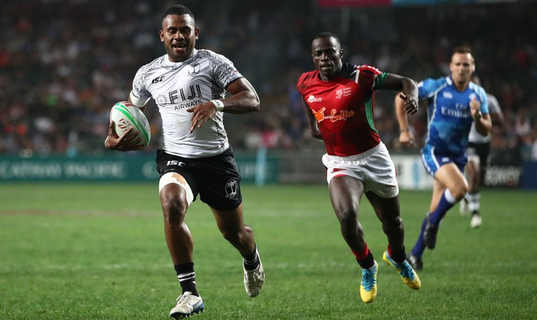 Having lost all their Pool C matches, Kenya Sevens will tackle Canada in the Challenge Trophy quarter finals of the Hong Kong Sevens on Sunday morning. Shujaa lost 22-5 to Fiji on the opening day of the competition on Friday and on day two, suffered a 36-0 thrashing against New Zealand before going down 28-12 to Australia.

They finished bottom of the pool and will now face Canada who finished third in Pool B. New Zealand and Fiji progress to the Cup quarters.

The team started day two poorly, New Zealand making a meal of them with a 36-0 result. Having been knocked off contention for a place in the Main Cup quarter, the boys were now only facing Australia for pride.

But, despite most of the senior players returning, they could not inspire the team but hope for a better performance on day three on Sunday.

The Australians took a 21-0 halftime lead with Laclan Millers’ try converted by Holland.

Kenya seemed rejuvenated for a comeback after half time and came in hoping for a comeback with Bush Mwale dotting down Kenya’s first try with Johnstone Olindi converting. However, Australia restored their 21 point lead when Hutchinson completed his brace with a little dummy to steer clear and Liam McNamara adding the twos.

Skipper Jeff Oluoch narrowed the gap to 28-12 when he picked up the ball from a set piece on the right before powering across the line.