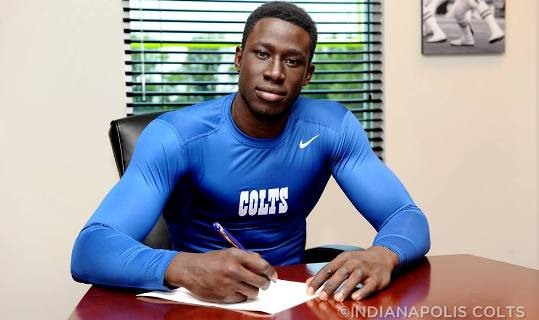 He made history when he signed two million US Dollars deal with Indianapolis Colts in 2013 and became the first Kenyan to play in America’s National Football League but seven years later, Daniel Adongo is living a sorry life in the United States.

On August 11, Adongo posted disturbing video clips of him looking terrifyingly ragged on his Facebook account and captioned them: “No getting used living a human life ogunda ogbe.”

The video made its way to the Kenyan socials on Thursday and was met with deep shock and disbelief on the miserable state of the once rugby union stellar-turned American football star.

In the  video, the 30-year-old Adongo is seen looking miserable, smoking (substance yet to be identified) and carrying a bottle whose contents remain unknown.

It is reported that Adongo, a former Kenya rugby U18 and U21 international player is into drugs, in a cult, broke and homeless abroad.

According to Bleacher Report, Police were dispatched to Adongo’s home on the morning of December 10 after a female resident of the household sent a text message to a friend requesting help. The linebacker was not home when the police arrived and the female resident was “unable to explain why she sent the text” after she declined to request medical assistance.

The revered American publication also indicated that no charges had been filed, neither had arrests been made by the time Colts sent Adongo parking. Despite police at the scene filing a report and forwarding the same to Hamilton County prosecutor’s office, he did not face any charges.

In the October 2015 episode, a female resident of Adongo’s house told the police that she was afraid of the 6’5 tall well chiselled bodied athlete and did not want him to return to his home. She did not divulge more information about this incident according to police report at the time.

She however confirmed that her relationship with Adongo was riddled by arguments for several months in that year. While she spoke to the officers, Adongo proceeded to the Fishers Police Department where he opted not to return home that evening. And according to officers’ report, he said he was going to end the relationship.