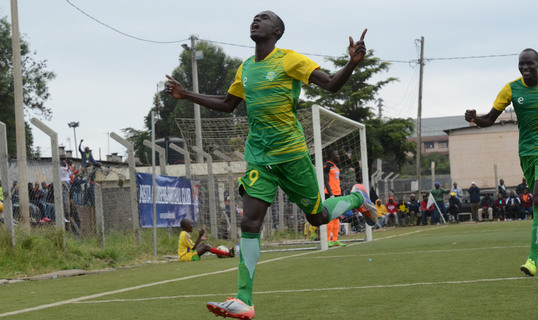 Kariobangi Sharks moved to fifth on the Kenyan Premier League table with a nervy 1-0 win over Posta Rangers at Camp Toyoyo on Sunday afternoon. Ebrimah Sanneh came off the bench to score 15 minutes from time to give William Muluya’s men their fourth win in five games.

It was a hotly contested and highly fought victory, with Sharks keeper John Oyemba making brilliant stops to ensure his side went home with victory.

A tough first half didn’t provide much of goal scoring chances to either team. Posta had the first chance in the ninth minute when Jockins Atudo’s freekick from range was tipped over the bar by Oyemba.

Sharks had to wait until the 32nd minute to construct their first close scoring opportunity when Patillah Omotto’s deep cross from midfield found George Abege, but the Ugandan striker’s header looped behind for a goalkick.

A minute to the break Omotto had a chance when he sighted shooting space from distance but his effort went just wide.

Posta started off the second half strongly and within the opening minute, Oyemba was forced to make another good save, backtracking to tip back a dinking effort from Dennis Mukaisi.

On the other end, a brilliant square ball from Abege found Fidel Origa running in from the right, but the midfielder’s connecting shot was wide.

Posta continued to push for a win having picked victory in only one of their last five games. They almost broke the deadlock in the 67th minute but Oyemba pulled off a brilliant save to pluck the ball off the top corner from a superbly taken Joseph Mbugi volley.

Sharks however made the most of their best chance of the half when substitute Sanneh who had just come on for Duke Abuya headed past a dazed Patrick Matasi off Harrison Mwenda’s cross with the winger having also come in as a sub.

Sharks almost doubled their lead at the stroke of fulltime but Atudo made a goal-line clearance to deny Abege who had picked up a cross from Mwenda before rounding the defense to stab at goal.