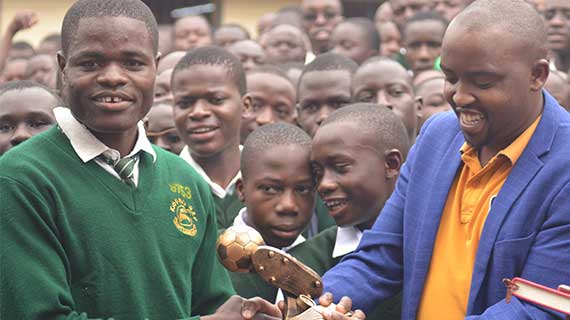 “If you are in class read like you will never play football and if you are in a football pitch play like you’ll never be in class.

Western Stima teenage sensation Benson Omala became the youngest player to ever win the LG/Sports Journalists Association of Kenya (SJAK) Player of the Month award after he was belatedly crowned the best in December on Wednesday in Kisumu.

The Kisumu Day High School, where Omala is a Form Four student, turned into a festival of celebration as Omala received his crown following his brilliant run in December that saw him find the back of the net five times, including one hattrick.

“I’d love to thank my coach for believing and nurturing me and I’m glad I repaid their faith by showing my brilliance and scoring goals which is a striker’s primary target,” the confident KCSE candidate said.

He added; “I’d like to score more goals if I get game time and be among the top scorers. My ambitions are to play for the national team. I already scored two goals for the Under 20 national team in CECAFA and I’m glad I was called up in the senior team despite not making the final cut.”

Omala was in the Chapa Dimba na Safaricom All Star team that went to Spain last year after emerging top scorer in the Nyanza regional duels. He hopes to get more play time with Western Stima but school schedule has come before football for him.

Omala was signed up at Western Stima just this season and makes time to train as the stadium is just across the road from his school. He says it is a good challenge for him balancing the two, but he sees his future being in football.

“If you are in class read like you will never play football and if you are in a football pitch play like you’ll never be in class. My target short term is to play two or three year in the local league then go to Europe,” he added

In winning the player of the month award he became just the third player from Western Stima to do so in the award’s six year-history. Others before him were Kenneth Muguna in 2015 and Wesley Kemboi in 2016.

Stima now complete a coach and player double for December after Salim Babu was named the best gaffer in December and awarded yesterday.

His coach Andrew Aroka lauded Western Stima for believing in Omala and giving him the chance to play in the big league. “I’ve handled a lot of you players but very few compare to this boy. They have been good in their own right but Omala is just a complete striker with very huge potential,”