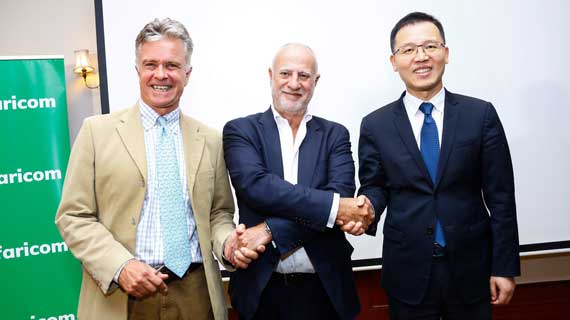 The Lewa Marathon will now change name to the Lewa Safari Marathon.The marathon will be held on 27th June

Safaricom and electronics company Huawei will jointly sponsor the 2020 Lewa Marathon for Sh30mn with this year’s event scheduled for June 27.

Regarded as one of the toughest marathons in the world, runners of all abilities have taken part – from elite professionals like Marathon World Record Holder Eliud Kipchoge to amateur runners and walkers and this year the marathon will change its title to attract more partners.

This year,  the marathon is expected to attract 1,400 runners with registration set to start on Thursday morning. The winner of the unique marathon will pocket Sh150,000.

Speaking at the launch, Mike Watson, CEO of the Lewa Wildlife Conservancy thanked Safaricom for standing wit the marathon for two decades,  “They have partnered with us for the last 20 years and the former CEO Bob Collymore had already hinted at the decision to scale down sponsorship this year. But we are glad they would still stick around and they have now brought on board one of their partners Huawei to sponsor this year’s edition together,” Watson said.

As such, the Marathon will now be renamed the Lewa Safari Marathon in a bid to attract more participants and corporate partners from outside the country.

“We felt it would be good to put safari in there because it is synonymous with Kenya. The international community knows it as Kenyan and this was also to give it a grounded name in Kenya and give it an international perspective,” Watson further stated.

Meanwhile, Huawei which has helped raise over Sh100mn since starting their partnership with Lewa say they will continue to strengthen the improved partnership.

“The positive impact that the Lewa Conservancy has on the wildlife and surrounding communities is truly incredible, and the marathon plays a crucial role in enabling that,” Stanley Shenlei, Huawei’s Key Account Director said.

Last year, the race raised close to Sh500mn which was pumped back to the community to help in conservation, education and healthcare.

There was a directors’ fundraising two weeks ago where Sh10mn was raised.