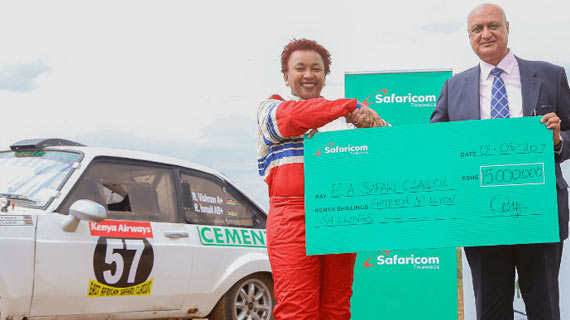 Safaricom made the announcement at an event held at the Nairobi National Park where Ramesh Vishram one of the participants, who will be rallying for the 5th time also presented his car for the rally – a Ford Escort MK2.

In addition to Sh15 Million cash sponsorship, Safaricom will provide connectivity and airtime worth Sh2 Million for the officials and rally crews.

“The Safari Classic Rally continues to uphold its reputation as one of the world’s toughest contests. It is our pleasure to be part its rich heritage. As fans come to experience the adventure of the rally, they will get an opportunity not just to sample the beauty of our country but will also get the chance to experience the breadth of Safaricom’s network coverage and fast internet speeds as they follow the action,” said Sylvia Mulinge, Director – Consumer Business Unit, Safaricom.

Among the big names enlisted for the event are 1984 World Rally Champion Stig Blomqvist, local hero and six time Kenya Champion Ian Duncan, as well as Team Tido and Kabras Sugar Racing who will both run a three car Porsche 911 team for the biennial event.

Also in the mix is the highly competitive Mazda RX-7 of French historic veteran Philippe Gache and Jonathan Somen of Kenya.

“This year’s rally will cover 4000kms going into Tanzania and back into Kenya in pre-1985 cars. With Safaricom’s great marketing and wide networking, the ‘World’s toughest rally’ will spread and this will encourage other drivers to participate. We are grateful for this because it means the Safari Classic will continue to grow,” said JS Vohra, Director, East African Safari Rally Limited.

“At Safaricom, we value sports and talent development as has been seen through our engagement in athletics through the Safaricom Athletics Series, and our recent sponsorship of the IAAF Under 18 Championships as well as Chapa Dimba Na Safaricom football tournament set to kick off next month. We believe sports plays an important role in transforming the lives of the communities that we serve,” said Ms. Mulinge.

This year’s rally will be flagged off at Sarova Whitesands on November 23rd and finish at the same venue on December 1st.