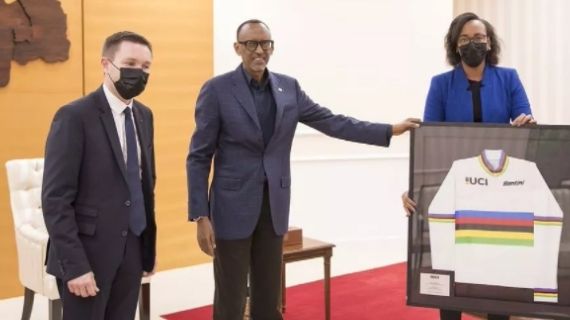 The Rwanda World Championships are expected to be held in the capital Kigali, which sits at an altitude of 1567m.

Rwanda will host the 2025 Road World Championships, becoming the first African nation to host the event.

The Rwandan President Paul Kagame was in Flanders to meet UCI president David Lappartient and the UCI Director General Amina Lanaya at this year's Worlds on Thursday 23 September 2021, and the Rwanda Cycling Federation was quick to announce the news.

The UCI has still to confirm that Rwanda will host the 2025 worlds but the East African nation has always been the favourite despite Morocco also making a bid. Cycling is hugely popular in Rwanda, with a number of riders merging to compete professionally in Europe in recent years.

UCI president David Lappartient has always supported Rwanda’s bid after using the idea to bolster his election campaign in 2018. He also visited the Tour of Rwanda in May.

The Rwanda World Championships are expected to be held in the capital Kigali, which sits at an altitude of 1567m.

The 2022 Road World Championships will be held in Wollongong, Australia, with Glasgow and Zurich hosting the event in 2023 and 2024.