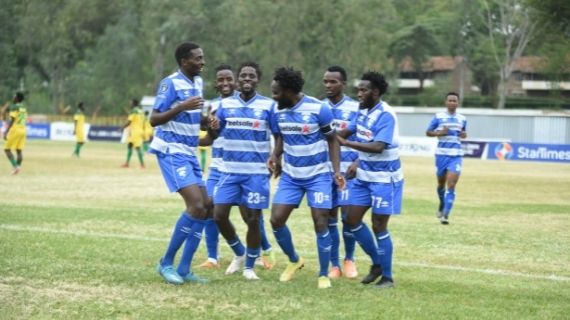 He was second in the just concluded 2020/21 FKF Premier League on 17 goals, seven behind golden boot winner Erick Kapaito of the Kariobangi Sharks and earned a maiden call up to the Kenyan national team.

Former AFC Leopards striker Elvis Rupia has joined Saudi Arabian Second Tier side Bisha FC on a one year deal. Bisha travelled to Saudi Arabia two weeks ago for talks and was excused from national team duty to try and seal the deal.

He ultimately found an agreement with the club and was officially unveiled. The striker who scored 17 goals last season had been tipped to join league champions Tusker FC, but made a turnaround after the moneyed Gulf league came calling.

Rupia was expected to make his debut for Bisha on Tuesday night, but the game was not played as their opponents Al Ain failed to show up for the game.

Bisha, formally known as Al-Nakheel FC was founded in 1960, it is located in the City of Bisha. It was promoted to second-tier at the end of the 2020/21 season after finishing fourth in the third tier.

This is the second time that the forward is trying his luck outside the country. Three seasons ago, he joined Zambian top tier side Power Dynamos but failed to sparkle after scoring 15 goals for Nzoia Sugar.

He came back home and joined Wazito FC where he as well failed to hit it running. However, a loan move to AFC Leopards proved the masterstroke as he was able to settle down and focus on playing and his performances earned him plaudits.