Rovanperä on the cusp of a maiden WRC Safari victory 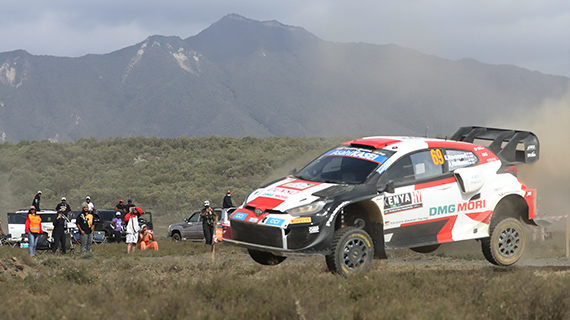 The 21-year-old Finn returned 7th fastest on the first pass of the 17km SS14 Oserian stage but racked up a win on the subsequent 13-km Narasha stage to maintain his lead in his GR Yaris Rally1.

Kalle Rovanpera is only two stages away from a maiden WRC Safari Rally Kenya victory after winning one of the three stages in the early morning loop.

The 21-year-old Finn returned 7th fastest on the first pass of the 17km SS14 Oserian stage but racked up a win on the subsequent 13-km Narasha stage to maintain his lead in his GR Yaris Rally1.

Following the early morning run, WRC crews had mixed reactions on the tough Day 4 stages which revolved around Oserian, Narasha and Hell’s Gate.

The second pass of the afternoon Hell’s Gate run will serve as the Wolves Power Stage where the top five drivers will savor additional championship points on the log.

"It's difficult to feel competitive - it's quite rough in there with a lot of unknowns, so I was very careful,” said Elfyn.

Takamoto Katsuta recounted his experience in the rough terrain. "Quite rough, so I had to manage quite a lot,” he said

Sébastien Ogier and his partner Veillas Benjamin are lying 4th. "We just have to go to the end. There is no reason to push - we have big gaps around - and we will try to enjoy the last kilometers," Ogier said.

Sébastien Loeb and his lady Isabelle Galmiche rejoined the rally on Saturday morning on Super Rally after retiring on the Friday fesh fesh sections: "We tried to push. The bad part from the beginning was out - it was quite rough still, but interesting to drive. We had some pleasure."

M-Sport’s Adrien Adrien Fourmaux set the fastest time of the early morning SS14 test. Here is what he had to say about his morning run: "For sure, the ground is really loose and the grip is really low. It was a clean stage for us and I enjoyed playing with the car."