Rookies eye Japan as they shine among veterans 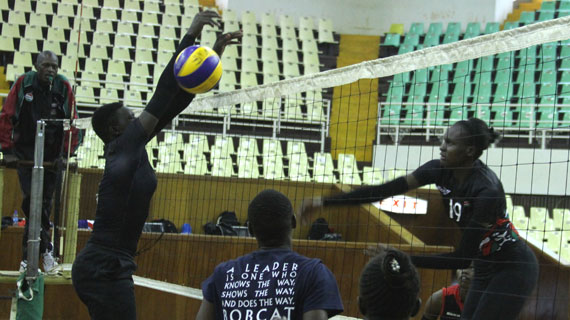 Malkia Strikers in training at Kasarani in Nairobi

As The Kenya national women volleyball team prepare for the forthcoming World Championships in Japan, The Malkia Strikers’ camp has received a new set of talented players who are out to fight for slots in the main squad amidst stiff competition from seasoned Veterans.

With the Rookies making the final squad of 22, the Kenyan technical team   led by head coach Japheth Munala is keen to set up a smooth transition with a blend of youthful stars.

Speaking to michezoafrika.com, the new national team players who are fresh from High School have exuded confidence in their abilities and praised how the entire team has helped them settle in.

“Personally, I am happy to be here and to make it to the provisional 22 is an achievement, looking at the quality that is in the team,” explained an excited Jemima Siangu from Soweto High School who now plays for Kenya Pipeline.

“The coach has been a great encouragement to us, he has helped us blend in, communicating that he has belief in us and that makes us grow even better in confidence. We know the whole team is behind us, encouraging us to work harder. The attitude around the team has helped us blend in. We are definitely looking forward to the Japan trip,” added Lorine Chebet who now is attached to former champions Kenya Prisons.

“I was part of the team that was in Egypt, and the experience challenged me to put in more. The prospect of making it to Japan is one that excites me and I believe with hard work and determination I will be ready to represent Kenya and help my team get good results,” Chebet continued.

Jemima Siangu and Lorine Chebet are among the quartet of fresh pairs of hands that have been incorporated in the national team fresh from school and according to coach Munala, they have shown sparks of brilliance. The other two are Caroline Sirengo and Sharon Chepchumba.

“We are preparing for the future of volleyball in Kenya and these four are making the transition. They are all fresh from school and are showing some sparks of quality. They have impressed us and I won’t be surprised if they make the cut into the Japan-bound squad,” said coach Munala.

The Malkia Strikers finished their  fourth week of a non-residential training at the Safaricom Indoor Arena, preparing for the World Championships set to be hosted by Japan from September 29th to October 30th.

The team broke camp last week allowing players to join their clubs ahead of the national league set for July 20-22 in Changamwe, Mombasa. The leg will also  double up as Mombasa County Speaker's Cup event