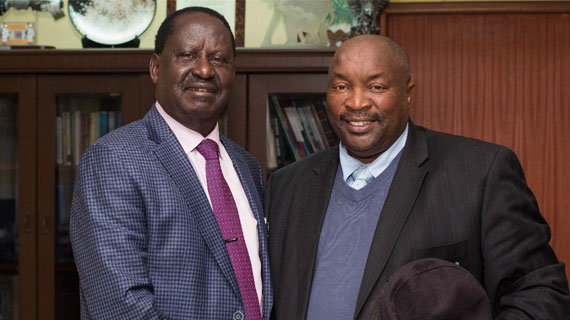 Former Kenya Prime minister Raila Odinga on Friday held a meeting with Jomo Cosmo, the owner of South African Premier League side Jomo Cosmos at his office in Nairobi.

The Right Honourable Raila has  said that the meeting was to explore sports investment in Kenya.

“Jomo is a premier footballer, soccer administrator and football entrepreneur with some big plans for the game in Kenya. I met Jomo in South Africa recently and I interested him in helping develop soccer in Kenya in addition to investing in other areas. He pledged to start soccer academies in the country in addition to starting a football club in Kenya,” Raila said in his twitter account.

Jomo is a former South African national team player and has been at the forefront of South African football development with his club Cosmos. Kevin Kimani who currently plays for Sofapaka has had a stint with the club though it wasn’t for long.