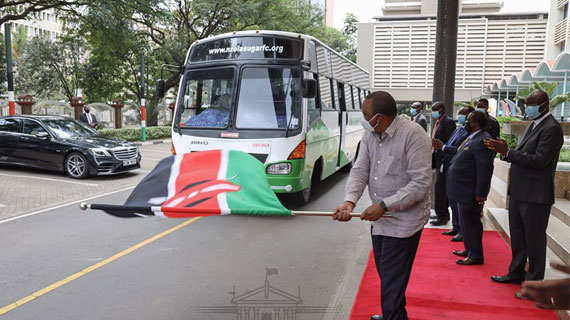 Bungoma based Nzoia Sugar Football Club  has received a Two Million shillings boost  from President Uhuru Kenyatta and a brand new bus  that was flagged off at Harambee House Nairobi on Tuesday.

The team, that is sponsored by Nzoia Sugar Company has been through harsh financial times in the recent year , at times struggling to travel for away matches due to financial constraints

The side  had a not so good 2019/20 season, settling for position 15 in the 18-team Kenya Premier League with 13 points up until the competition was stopped due the Covid -19 Pandemic.

The president's cash donation is a huge relief for the side that has been facing financial hardship for over a year. The club owed players salary arrears since May 2019 and is just last month they cleared a percentage of their debt.

The president directed that the bus be used by the Club for their sporting engagements. He made the donations during a meeting with leaders from Western Kenya drawn from Kakamega, Vihiga, Busia, Bungoma and Trans Nzoia counties including the five Governors.