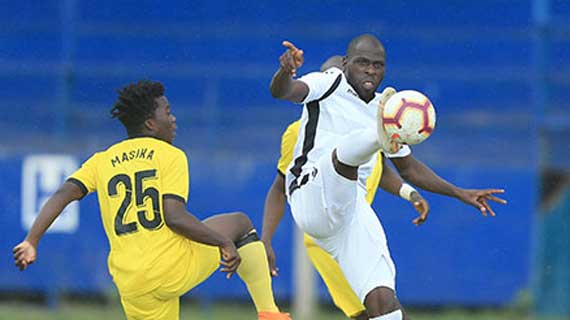 Gor Mahia defender Joash Onyango will be out for two matches after being suspended, following his red card against Western Stima in their last league match. Head coach Steve Polack has admitted they will miss the defender beginning with Sunday’s match away to Zoo Kericho.

“When you miss a good player it is always something bad for the club. Joash is an important part of the team and his absence will definitely leave a big hole in that defense. But also, I look at it as an opportunity for someone else to step in and show we can trust him,” stated the coach.

Gor travel to Kericho winless in their last two matches having lost to Sofapaka and drawn with Stima. They are under pressure to win especially with four points separating them from second placed Tusker who have a match at hand.

But, despite the close proximity to their competitors, Polack says the team is under no pressure and are taking a match at a time. They come up against a Zoo side that on paper shouldn’t be a tough ask for them.

In seven encounters between the two, the best that Zoo have picked is a draw while the other six matches have ended in defeat. In the last three matches, Zoo has failed to score against Gor while overall in seven games, they have only scored four goals. Zoo hasn’t also won in eight games, losing six and drawing two.

Despite being overwhelming favorites for the tie, Polack is exercising caution.

“Everyone pulls up their game when they come up against Gor Mahia. We understand that they are fighting to get out of the bottom zone of the standings and we know they will come out strongly,” stated the coach.

Gor will maintain their gap on top with victory and if Tusker fail to get points against Wazito, then they will have a healthy seven point buffer for one more week.