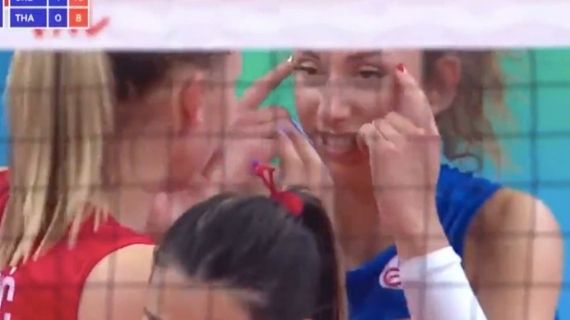 Sanja Djurdjevic was photographed pulling at the corners of her eyes with her fingers, a derogatory gesture towards Asians.

A player from Malkia Strikers opponents in Tokyo has been hit with a two-match ban after making a racist gesture during between Serbia against Thailand.

Sanja Djurdjevic was photographed pulling at the corners of her eyes with her fingers, a derogatory gesture towards Asians.

The incident happened during her side's 3-0 victory over the Thai team at the Volleyball Nations League in Rimini, Italy, on June 1.

The sport's governing body said its disciplinary committee found that she "violated the FIVB Disciplinary Regulations following a gesture made during the Volleyball Nations League 2021 match between Serbia and Thailand".

The Volleyball Federation of Serbia was also fined 20,000 Swiss francs.

"Once again, our sincere apologies to all affected and big thanks to the Thailand Volleyball Association for understanding and friendly attitude," it said.

But it insisted that the gesture "wasn't meant to be provocative or insulting".

"We understand the point of view of the FIVB, even if, as we argued, culturally, we see this gesture as rather affectionate, that it may be interpreted in a negative way by the Asian people."

Later this month the Serbia team will head to Tokyo for the Olympics, where they face South Korea, Brazil, Dominican Republic, Kenya and hosts Japan in Pool A.