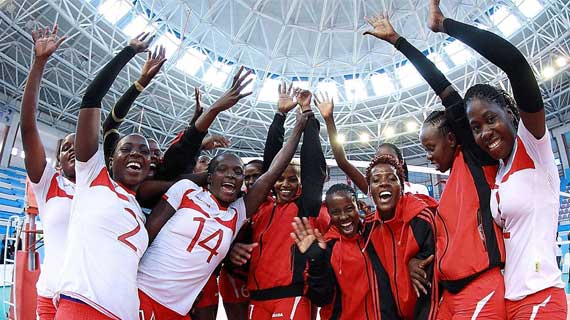 While Prisons won in straight sets, Pipeline dropped a set before bouncing back to win 3-1.

Prisons were the first on the court and they were in emphatic form against Ivory Coast representatives Asec Mimoasa winning in sets of 25-7, 25-17 and 25-12

“It was another good performance from the girls though we had some nervous moments in the second set. But overall I am happy. Our focus remains to win all our group matches,” Lung’aho said after the victory.

Prisons allowed the West Africans to come back in the game after starting the second set well with four unanswered points but let off for them to draw within a point. However, they managed to get their hands on the steering wheel being 8-7 at the first technical time out and 16-10 at the second.

Seemingly trying to push the game into full stretch, Mimosa corrected their mistakes in the final stretch of the set, but Pipeline used their experience well to wade off for a 25-17 score.

They avoided more mistakes in the final set, hitting the balls hard, improving their blocks and reception before running out 25-12 winners. However, the final few minutes of the set were characterized with small mistakes with Prisons having led 23-8 at some point.

Pipeline who have won the tournament seven times had some moment of nerve when they convincingly won the first set 25-7 against Uganda’s Vision Club, but somehow dropped the second set to lose 26-24.

Japheth Munala’s girls rose up from the shock to correct their mistakes and won the successive final two sets 25-13 and 25-15.

Prisons will take on Douannes of Botswana tomorrow while Pipeline will be up against Congo’s DGSP and another straight sets harvest will almost assure them of places in the quarter finals.