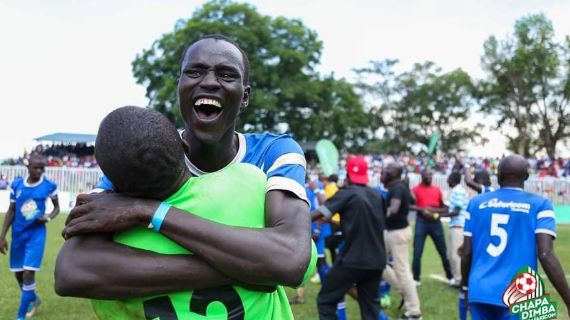 He was part of the Kapenguria Heros team that won the 2018 Chapa Dimba na Safaricom PLC tournament.

Majak who only took football seriously in 2017 fled internal strife in South Sudan, finding himself at the Kakuma refugee camp in Northern Kenya in 2007.

He started school in the outskirts of Nairobi after moving with one of the South Sudanese he met in Kakuma before moving to Kapenguria, a town close to Kakuma in Kenya’s Rift Valley region. This is where his journey as a footballer started.

He played for the local team Kapenguria Heroes during the Safaricom sponsored tournament Chapa Dimba and they twice won the title in 2017 and 2018 where he was named MVP.

“I used to play football just for fun. However, when we won Chapa Dimba in the second edition, that’s where everything opened up,” explains Majak.

Kenyan Premier League side Kakamega Homeboyz reached out to him while he was still in school but when they said nothing after signing an agreement with him, he chose to move on.

He went on to Mount Kenya United before leaving again to try out with Tusker. He was an instant hit with head coach Robert Matano who instructed his immediate signing.

“He is a good player very disciplined and hard working. He has a lot of talent and is still young. I was impressed with him from the first moment I saw him,” Matano said.