Organizers receive boost ahead of 12th Madoka Half Marathon 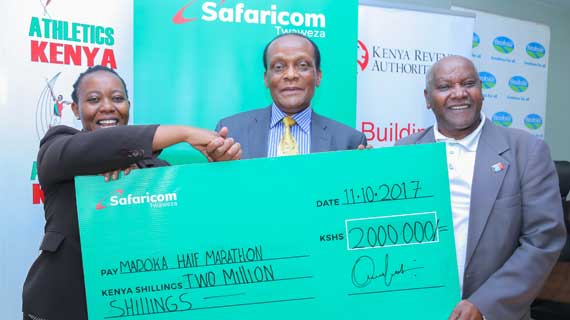 Organizers receive boost ahead of 12th Madoka Half Marathon

Safaricom has announced a Sh. 2 million sponsorship for the Madoka Half Marathon, set to take place on 21st October in Mwatate, Taita Taveta County.

The sponsorship for the 12th Edition of the 21Km Marathon will cater for security, running numbers, winners’ prizes and the logistical aspects of the event.

Winners of the 21km race for both men and women will take home Sh 500,000. Hosea Mwok from West Pokot and Lucy Cheruiyot from Elgeyo Marakwet won the 2016 edition of the race.

Over 6,000 athletes and locals are expected to take part in the annual race. Other upcoming races in the Safaricom Athletics Series include: The Imenti South Road Race and Kisumu Town Marathon, which will wind up this year’s edition in December.

“As always, we would like to thank Safaricom for their continued support over the years and for the part they have played in the race which has churned out athletics greats such as the 2012 World Half Marathon Bronze Medalist John Mwangangi,” said Marsden Madoka, Race Founder.

“I am grateful that Athletics Kenya and the Madoka Half Marathon organizers have given us a chance to be part of the race just as they have done for the past 12 years. Our aim is to ensure that the Safaricom Athletics Series encompasses all talented Kenyan athletes from every part of the country,” said Sylvia Mulinge, Director – Consumer Business, Safaricom.