On-form bandari make it two in two with Sofapaka win 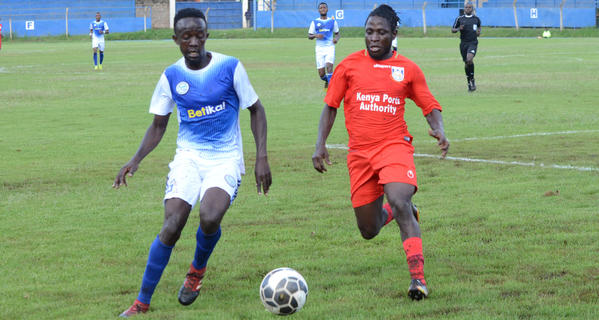 Bandari continued with their imperious Kenyan Premier League form, coming from a goal down to beat Sofapaka 2-1 at the Kenyatta Stadium in Machakos on Sunday. This was a second consecutive win for the dockers who beat defending champions Gor Mahia by the same margin in their first match of the season.

Yema Mwana and Wycliffe Ochomo scored in the second half after Kepha Aswani had hit the back of the net after 35 seconds to hand Bandari the maximum points from the tie.

Aswani scored the second quickest goal in the league after Ephraim Guikan scored after 23 seconds for Gor last Wednesfday, after tapping home a cross from Cliff Kasuti on the right.

On the other end, Richard Aimo made a great save to deny Yema Mwana who had broken into the area to shoot, but the keeper managed to put his body on the line.

Sofapaka had a great chance after 10 minutes when Mike Oduor tried his luck with a shot from distance but Bandari keeper Faruk Shikalo put a finger tip to the ball turning it behind for a corner.

It was a game of chances on either end and the visitors had one more after 26 minutes when Aimo did well again to go down and save a shot from Abdallah Hassan before he positioned himself well again 10 minutes later to block a header from the winger who was isolated on the left.

At the start of the second half, Sofapaka almost went two up when Aswani rose in to head a cross from Kasuti but the effort went inches wide.

But, Bandari went back level in the 57th minute off a counter attack with Yema Mwana beating Aimo one on one. Coach Melis Medo’s decision to pull out Elli Asieche for Faina Jacobs proved to be a bad one as Bandari fully exploited the right wing

Despite seeing their lead cut short, Sofapaka gave in a fight and they should have been back up but Kasuti could not shoot past Shikalo who was off his line.

Immediately, Sofapaka was punished for the miss with a swift counter, Mwana running beyond Mousa Omar and Jacobs before putting Ochomo through to tap into an empty net.

Batoto ba Mungu should have made an immediate response after going down when substitute Piston Mutamba did well to shield a long ball on his chest before teeing up Oduor through on goal but somehow the midfielder could not hit the target with a gaping goalmouth.

Having thrown away a 1-0 lead, Sofapaka pushed for an equalizer and should have had at least a goal with Mutamba bearing the chances.

First his effort with a freekick from good scoring range was acres over the bar while his second attempt was with a shot inside the box which was an easy catch for Shikalo.

Three minutes to time, Sofapaka had another chance off a counter when John Avire rushed in from the left but one on one with Shikalo, the keeper came off tops with a save.

The ball was cut back to the edge of the box and met by Dennis Odhiambo whose powerful shot was deflected for a corner.