Omollo joins Stars camp at Kasarani ahead of departure to France 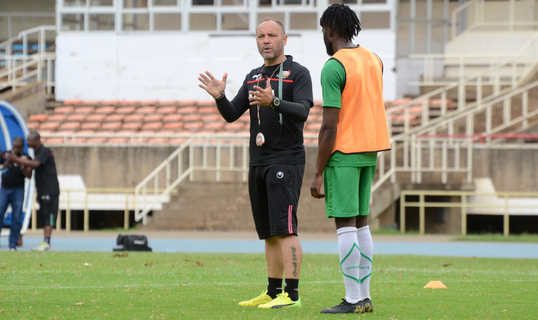 The Harambee Stars squad training at the Moi Sports Centre Kasarani was on Monday boosted with the arrival of midfielder Johannah Omollo ahead of Friday’s departure to Paris, France for a three-week residential training camp.

The Belgium based Omollo joined three other foreign based players in Clifton Miheso, Masud Juma and Musa Mohammed in Coach Sebastien Migne’s training that is largely made up of local based players.

“It was important for him to come here because I would like us to build something from early. I have the other three and I believe their presence will help me a lot in terms of building up the team,” Migne said after the team’s training session.

The team was put up through their paces with the departure to France scheduled for this weekend. The tactician had his entire squad, including the team that will remain behind for the CHAN qualifiers after the AFCON.

Migne says he is impressed with the improvement the team has had over the past week of training and wants to have at least one session weekly with the team even after the AFCON.

“Tactically the players have improved a lot. For example Duke (Abuya), today he was not shy. He was comfortable on the field and expressed himself better. It is the reason I need to work with the locals more because there is a huge difference between the locals and the foreign based players,”

“If we can have one session weekly with them we will improve. Not just the national team but in the clubs as well. We have to look beyond AFCOn and look at the future,” he stated.

Migne has also called up Wazito’s Musa Masika into the team as well as AFC Leopards defender Yusuf Mainge who he is grooming for the CHAN qualifiers.