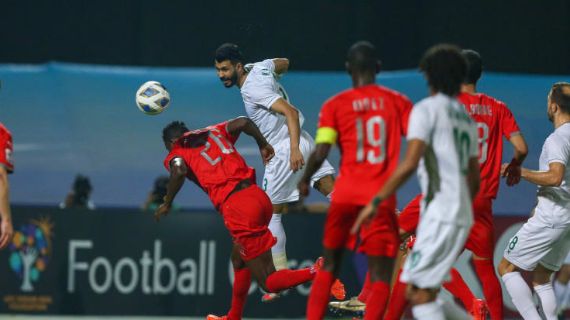 Action between Duhail and Ahli

Michael Olunga's Al Duhail and Al Ahli Saudi played out a 1-1 draw on Matchday Six of the 2021 AFC Champions League Group C on Saturday, ending both teams’ chances of qualification to the Round of 16.

The two sides came into the match knowing only a win would secure a place in the next stage while a draw would mean both sides would be eliminated at the group stage.

With that in mind, both teams spared no effort to attack their opponents producing thrilling end-to-end action throughout the 90 minutes.

Al Duhail had the first chance of the game inside two minutes when Michael Olunga rose highest to meet Edmilson’s cross from the corner but headed just wide.

An avalanche of chances throughout the remainder of the half produced no goals as Al Ahli’s Driss Fettouhi tested goalkeeper Salah Zakaria from range and Edmilson chose to shoot straight at Mohammed Al Owais from a tight angle when he had the option of crossing.

The goal seemed to have shaken the Saudis’ confidence as three minutes later, Hawsawi conceded a penalty, bringing down Edmilson inside the box.

Olunga stepped up ready to cement his side’s win but went for power over accuracy and watched his shot cannon off the crossbar and behind.

The 20-year-old controlled Fettouhi’s diagonal pass inside the box and finished with composure past the goalkeeper in the 73rd minute.

Several attempts for both sides, most notably through Olunga and Edmilson for Al Duhail and Alexandru Mitrita for Al Ahli could not produce a winner despite five minutes of added time.

The result means both sides crash out of the AFC Champions League with Islamic Republic of Iran's Esteghlal FC topping the group.