Olunga on a hatrick as Reysol step up promotion bid 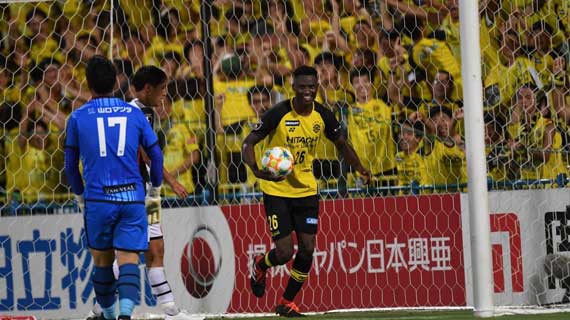 Olunga bags his first hattrick of the season in Japan

Harambee Stars forward Michael Olunga bagged his first hatrick of the season as his Japanese second tier side Kashiwa Reysol beat Renofa Yamaguchi 4-1 to extend their lead on top of the J2 League. Reysol moved to 55 points after 27 matches, four ahead of second placed Kyoto Sanga.

Olunga scored in the third minute before adding the second on the hour mark. Ryoma Ishida then grabbed one for Yamaguchi in the 65th minute, but their hopes of a comeback were thwarted in the 69t minute when Cristiano da Silva scored the third for Reysol.

Olunga put the icing on the cake with his third of the evening and the fourth for Reysol in the second minute of added time.

The lanky forward is in sizzling form for Reysol and his hatrick on Saturday took his tally to 11 goals in 18 matches. He has also registered four assists. This is his second highest scoring form away from home, three years after hitting 12 for Djugardens in Sweden in 27 matches.

The on form Reysol have won 10 matches in a row and of those 10, they have won by scoring four goals or more. If they finish in the top two positions, Reysol will be assured of a return to the J1 league, just a season after being demoted.