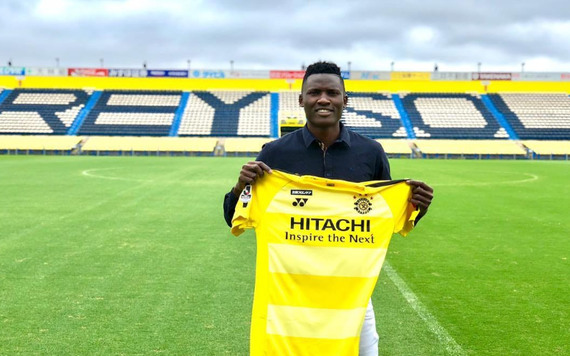 Harambee Stars striker Micheal Olunga has joined Japanese club Kashiwa Reysol on a three-year-contract from Chinese side Zhicheng. The towering striker will pocket $150,000 as monthly wages in the new deal.

The 24-year-old scored three goals in the Spanish La Liga last season where he was on loan at Girona FC from Chinese club Zhicheng.His mega move from Swedish side Djurgarden allowed the club pocket a record 4.2 million Euros from the Chinese club but Olunga failed to secure a starting berth thus opting for a loan move.

Olunga has been Harambee Stars’ mainstay recently with his prolific goals at the international arena.

In the now popular Japanes League, Olunga joins the likes of  Andreas Iniesta and Lukas Podolski who moved from big clubs in Europe to Japan.

According to Wikipedia, Kashiwa Reysol is based in Kashiwa, Chiba. The team competes in the J. League Division 1 from 2011 season.

The club was formed in 1940, as joint founding members of Japan Soccer League in 1965 and have spent the majority of their existence in the top tier of Japanese football. They have been Japanese league champions twice, in 1972 and 2011, and have won three Emperor's Cups.