Oktay to welcome back trio ahead of Stima clash 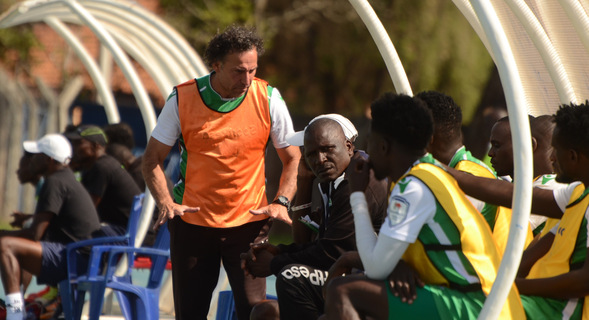 Gor Mahia head coach Hassan Oktay has been boosted with the return to fitness of midfielders Francis Kahata, Kenneth Muguna and Lawrence Juma ahead of this weekend’s clash against Western Stima at the Moi Stadium in Kisumu.

Kahata and Muguna have missed the last three games while Juma has been out for close to six weeks but their return will offer a timely boost for the tactician.

“We will now have more options especially in midfield and that is something great for us. We have played so many games in the space of very little time and this has really made it difficult for us with players getting injured and fatigue also,” the tactician stated.

He believes the return of the three will strengthen them further but still maintains that their hunt for the title is not yet over despite being seven points clear and with a match at hand.

“No it is not yet over. We still have a long way to go and we have to go step by step. The journey is still tough and having to play games every two or three days and you have to change, sometimes you lose team balance and that makes it very tough,” the tactician stated.

Gor will play three matches within eight days, including a possible title decider against Sofapaka.

“By this time we are used to playing games after few days. We will handle it and I hope we will be okay,” stated the coach.