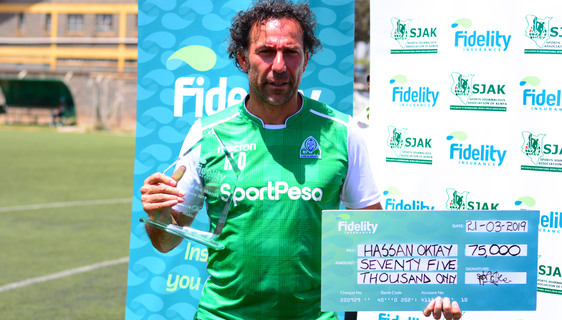 Gor Mahia coach Hasan Oktay has been named the Fidelity Insurance/Sports Journalist Association of Kenya(SJAK) Kenyan Premier League coach of the month for February having led his side to four victories and a draw in five matches that month.

This imperious run came even as the club was engaged in two tough CAF Confederations Cup matches, winning one of them 4-2 against Zamalek.

“I am happy to get this award. We have been getting good results and improving as a team. I introduced my philosophy, sometimes it takes time but we are slowly getting there,” the tactician stated.

He added; “A lot of people were questioning me after we lost second game, but I told them to be patient we would get better sometimes adaptation and transition takes time, we haven’t achieved yet, but we will work hard.”

Gor produced superb league performances in the month where they began with a 1-0 win away to Vihiga United before silencing their traditional rivals AFC Leopards 2-0 in their subsequent match at the Moi Stadium Kasarani.

The 17-time Kenyan champions saw off a in-form Sofapaka 1-0 in their third match at Afraha Stadium but were held to a one all draw by Western Stima in their fourth encounter at Kasarani. K'ogalo defied a numerical disadvantage to edge Tusker 1-0 at Kenyatta Stadium, Machakos in the final match of the month.

The Cypriot coach garnered 12 points in a poll conducted by an SJAK panel to beat Bandari tactician Bernard Mwalala who came second with 8 points. Mwalala who was voted the second best tactician in January had guided Bandari to four wins and a draw in the month.

Oktay becomes the third recipient of the  award in the ongoing  2018-2019 season after Western Stima's Paul Ogai and Mathare United's Francis Kimanzi we're decorated in December and January respectively.