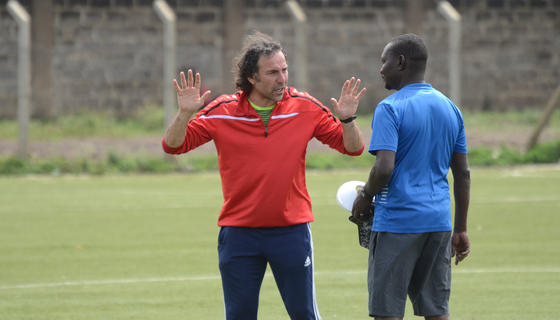 Gor on the verge of CAF Champions League history

New Gor Mahia head coach Hassan Oktay will endear himself further to the Gor Mahia fans if he achieves the huge task of seeing the team qualify to the group stages of the CAF Champions League for the first time ever in their history.

Gor Mahia are just a draw away from achieving the massive feat and if they can manage to avoid defeat in their second leg first round tie against Nigeria’s Lobi Stars in Enugu this weekend, then that dream will turn into a reality.

“I have been in charge here for a week and my target is big here. First I want to go group stage and then second I want to reach the final,” The Cypriot coach said after his side’s first leg victory on Sunday.

Gor Mahia picked up a comfortable 3-1 victory at the Kasarani Stadium and heading to the return leg, any kind of draw will take them through and at worse, a 1-0 loss will be enough for them to go through.
Despite giving themselves a massive advantage from the first leg, Oktay was not really impressed.

“It’s a good result but it didn’t please me because we had more chances to win the game 5-1 and go for the away game and keep it that result, we should have won easily; I am not happy,” the coach said.

Gor were dumped out of the same stage last season by eventual champions Esperance after drawing 0-0 at home and losing the return tie 1-0. This time though, Gor say they are wiser and will be able to sustain the storm.

Meanwhile, Lobi coach Solomon Ogbeide has warned Gor not to celebrate quick and says his side will give their best in the return leg to win and progress. Lobi will go through if they win 2-0 or by a margin of more than three goals.

The tactician sais they found it hard to adjust to the grass pitch as they are used to train and play on an artificial turf and now that they are going back home, they will be on their A game.

“We are not out; this is just first leg. The score line doesn’t matter to me. We have seen them now and we will go back home and look at where we need to make corrections and in the return leg, the result will be different. There is no problem at all in losing today,” the coach opined.