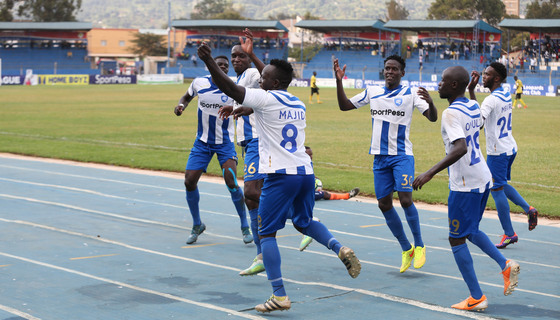 Ezekiel Odera struck a second half brace as AFC Leopards moved to third on the Kenyan Premier League table with a 2-0 win over Chemelil Sugar in Machakos on Saturday afternoon. In other results, Mathare United versus Vihiga United at Camp Toyoyo as well as Zoo Kericho versus Sony Sugar in Kericho all ended in identical 1-1 draws.

In Machakos, it was joy for Ingwe boss Rodolfo Zapata who continued with his unbeaten start at the club, picking the third win on the trot. Ingwe were dominant and created most of the chances in the tie.

A sloppy first half saw Ingwe lose some of the chances they had, twice, Victor Majjid’s shots from range going acres wide while the best opportunity fell on Whyvonne Isuza who failed to direct Brian Marita’s cross on target unmarked at the backpost.

In the 36th minute, AFC keeper Ezekiel Owade made a brilliant save to deny Chemelil after Felix Oluoch had beaten Salim Abdallah to the ball to earn space and let off a ferocious shot.

Two minutes from the break, Majjid had a chance to redeem himself from the several stray shots when the keeper spilled Marita’s cross on his path, but the midfielder’s shot on the left foot went straight to the keeper.

In the second half, AFC continued to press and just two minutes after the restart should have been one up. A long throw from Moses Mburu found Odera at the edge of the six yard box and the forward swung a volley but keeper Robert Aimo reacted brilliantly to tap the ball away.

Another chance fell on Ingwe in the 55th minute when Isuza picked out Jaffery Owiti with a defense splitting through pass but the youngster’s toe poke away from the keeper from the edge of the box went inches wide.

AFC were almost punished for losing the ball cheaply in the middle of the pack 10 minutes later, but Oluoch could not capitalize to beat keeper Owade after the shot stopper sprinted off his line in a bid to cut off the danger.

Odera continued to torment the Chemelil backline and he would have had a goal in the 73rd minute but his shot from the right off a Marvin Nabwire long ball went wide.

But just one minute later, he was on the scoresheet when he rose high above everyone in the box to head into the roof of the net another of Mburu’s long throws. Ten minutes later, Chemelil almost paid from another similar routine throw, but Salim Abdallah’s header went wide.

AFC sealed the tie three minutes from time from the penalty spot after Owiti was fouled inside the box by Vincent Mahiga. Odera stepped up and slammed home a cool penalty to drive the final nail on Chemelil’s coffin.