Nyamweya, the coach, the players and the fans must go! 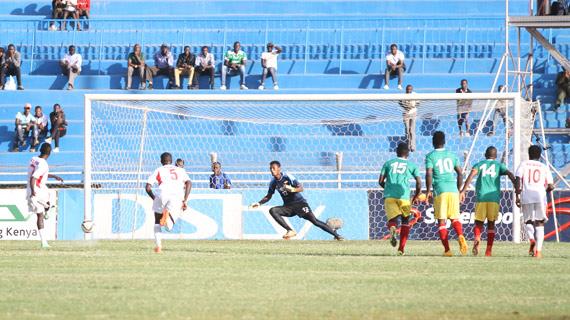 Nyamweya, the coach, the players and the fans must go!

Nyamweya must go! Bobby must go! Sub! Sub! That’s the familiar chorus most Harambee Stars fans sing during and after a dismal performance by the national team. True, Nyamweya is not a saint but should all blame be squarely put on him? Yes and No.

FKF's role is to facilitate the national team and on that they failed miserably for Ethiopia match. A low key friendly with Gor Mahia and murmurs over unpaid allowances before such a crucial match was a big fail.

Did the players walk home after the match? Were we trying to milk a cow we had not fed? With the Millions pumped in by FIFA and sponsors, the Federation can save us from such national embarrassments.

No, because Nyamweya does wear the national jersey and walk onto the pitch. The coach and players must all share the blame.

Lack of motivation aside, on Saturday the coach chose his squad based on what was  available to him. Olunga, Abondo, Were, Kimani, Oluoch, Mieno and the rest are the best players we have currently in the domestic league, well that’s based on the goals and comments by bloggers and “tactically enlightened” fans on social media and blogs.

Someone said the Kenyan Premier League is overrated. This could be true after all based on the display at Nyayo. One would have thought the Kenyan players would forget the unpaid allowances and use the opportunity to market themselves, but what we saw would turn away any scout looking to land a special talent from Kenya.

The players are to blame for failing to live up-to expectation but also the individual role assigned to each by the coach should be known so that a fair judgment on what they were to do versus what they did is reached.

The coach needs to revise his tactics. As he admitted, he may not be having total control of the squad. Dennis Odhiambo was to take penalties as per the game plan but somehow, his lack of confidence meant Ali Abondo, renowned for his par excellence execution was left with the task and we all saw what he did.

Starved strikers, disjointed midfield, exposed keeper, long aimless crosses characterized our "agriculture" style of play. This is not what Bobby is paid for. The Ethiopian coach had read Kenya's game very well and admitted that they knew by cutting those long crosses, Kenya would be dead and buried!

Its time Bobby ignored the commentators and went beyond KPL to scout for players, make them adopt to his system (if he has any) then take full credit for any win or full blame for any loss.

Finally, the fans were also a big fail. A fortnight ago, Bahir Dar Stadium  was overflowing with fans when Ethiopia beat Kenya to secure a first leg advantage. This was a sharp contrast to what we saw on Saturday. As the teams warmed up, the Nyayo stadium was half empty. Ethiopian fans were visibly present for their team and motivated them upto the last whites.

The few fans who turned up became more of a discouragement than encouragers repeatedly calling for substitution of players on the pitch further dampening the already dim hope. The fans could also be heard hitting out at players because they are from a certain team.

As Harambee Stars fans, we are not there for our team but expect miracles from them! The bottom-line is everyone involved i.e. the federation; the fans, the coach and the players need to play their part, celebrate a win as a team and also accept defeat as team. Everhead of collective responsibility?

Way forward? It is always fashionable to blame FKF (Nyamweya in this case)  when the team does not register results but when they won Cecafa no one mentioned Nyamweya! Poor Uncle Sam! Maybe it is time we subject the coach and the coach, players, the fans and the federation to performance contracting.

If all fails, the chorus should be aimed at overhauling the whole system not just Nyamweya! What do you think?