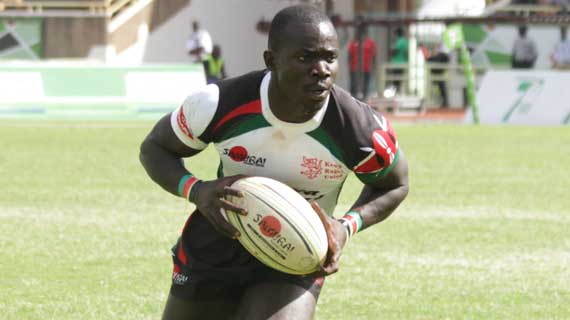 A trio of Kenya Simbas internationals namely Elkeans Musonye, George Nyambua and Davis Chenge are among the men’s nominees in the rugby category for the 2017 Magharibi Michezo Awards which will be held on Saturday 23rd December in Bungoma County.

Also making the nominees list in this category are Chrispin Shitundo and Leonard Mugaisi while Zeden Marrow, Derrick Keyoga and Ashiundu Derrick make the cut in the junior men’s nominee list.

Kenya Lionesses international Sheila Chajira is among the nominees in the women’s category.

Seniors
1. ELKEANS MUSONYE(Strathmore Leos)
Musonye, a former winner of the Most Promising Player accolade at the MMAs  transferred from western Bulls to Strathmore Leos helping the Varsity side to avoid Kenya Cup relegation in a season they had the worst performance. Musonye would be called to the Kenya Simbas squad.

Apart from captaining Kabras in the Kenya Cup final, Nyambua captained Kenya Simbas in a test against Hong Kong.He also made the writer’s Kenya Cup team of the season.

4. DAVIES CHENGE (KCB)
Chenge returned from a lengthy injury lay-off to help KCB win the 2017 Kenya Cup. With the absence of Andrew Amonde, Chenge was the driving flanker for the bankers.
He returned to the Kenya Simbas where they finished second. He led the team to the tour of South Africa as the captain.

5.LEONARD MUGAISI (Homeboyz)
A former MMA winner,  Mugaisi led Homeboyz to two cups in the national sevens circuit. Mugaisi was also part of the Kenya Sevens and played a number of matches in the Kenya Cup helping Homeboyz reach the semis.

Most Promising
1.ZEDEN MAROW (Homeboyz)
The Homeboyz star is a former Bungoma High player who has taken the top tier rugby with a bang. Homeboyz head coach Paul Murunga once described him as ‘lion’. He played the 2017 national sevens circuit helping Homeboyz finish second.

2.DERRICK KEYOGA (Menengai Oilers)
You can’t mention Menengai Oilers without mentioning Keyoga. He was one of the players who steered Oilers to Nationwide win without losing a single match.

Keyoga also helped Kenya Under 20 finish second in Africa and has since received a Kenya 7s call-up.

3.DERRICK ASHIUNDU(Kakamega High)
The Kakamega High centre was on top of his game as Kakamega reclaimed the national title in 2017 beating Laiser Hill Academy.He scored in the 18-14 win over Laiser after what was a successful week for him. Ashiundu went ahead to steer Kakamega to the regional title in Uganda.

4.BETHWEL ANAMI (Strathmore Leos)
The former St.Peter’s Mumias flanker is one of the back-rowers to watch in the Kenya Cup this coming season

5. HILLARY ODHIAMBO (Kabras Sugar)
If there is a player Kabras Sugar are not about to sell is Odhiambo. He plays as a second row and eight-man.He joined Kabras Sugar immediately after finishing high school at Shamahoho Boys and went ahead to play in the Eric Shirley Shield as well as Enterprise Cup.