Nyakha denies Gor at the death as Nakumatt hold Gor 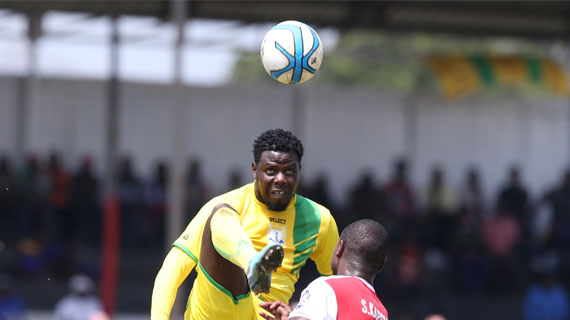 Nakumatt FC slowed down Gor’s wheeling machine, holding them to a 2-2 draw at the Kenyatta Stadium in Machakos on Saturday evening. Harun Nyakha struck the heart punching goal in the second minute of added time as Gor dropped points for only the fifth time in 22 Kenyan Premier League matches this season.

The draw consequently might mean Gor’s lead at the top of the standings might be cut to at least 13 points if Sofapaka pick maximum points against Ulinzi Stars on Sunday in Narok.

Gor Mahia who are faced with a hefty fixture pack in August where they play nine games the whole month had to make with some changes into the squad as head coach Dylan Kerr looks to keep the squad fresh.

Gor who have been on a role this season started off superbly and were ahead after 34 minutes when Ivorian forward Ephraim Guikan broke the deadlock with a finish at the near post from Kevin ‘Ade’ Omondi’s pass.

This lead, they took to the break.

Nakumatt came back from the breather rejuvenated and they were level when Joe Waithira’s shot from distance beat Shabaan Odhoji in Gor’s goal. Gor restored their lead in the 72nd minute through Boniface Omondi who finished off Lawrence Juma’s cross off a counter.

However, the pint-sized winger was stretchered off immediately after picking an injury and was replaced by Francis Mustafa.

Gor were punished for lack of concentration in added time when Nakumatt restored parity, Harun Nyakha tapping home after keeper Odhoji had fumbled in handling a cross into the area.

In other results on Saturday, Posta Rangers went down to a shocking 3-1 loss at home against visiting Bandari at the Camp Toyoyo Ground.

Yema Mwana and Shabaan Kenga gave the visitors a deserved 2-0 lead at the break before Cavin Odongo restored some hope for Posta with a 51st minute goal. However Wycliffe Ochomo took the game back to comfortable distance for Bandari with a goal 10 minutes from time.

The victory saw Bandari climb to second in the standings with 42 points while pressure continues to mount on Posta Rangers boss Sammy Omollo with Posta lurking at 10th.

In Kakamega, Tusker continued with their resurgence beating hosts Homeboyz 2-0 coached by their former coach Paul Nkata courtesy of a quick fire brace from Boniface Muchiri in the third and ninth minutes.

The victory saw Tusker move to sixth in the standings while Homeboyz remained ninth.

Elsewhere, Chemelil Sugar handed themselves a massive shot in the arm as far as their survival hope is concerned beating Vihiga United by a solitary goal scored by Edwin Omondi five minutes from time. The victory took Chemelil to 13th while Vihiga remained 16th with 23 points.