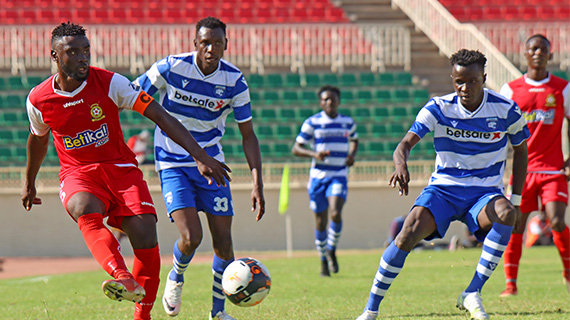 The duo of Jaffari Owiti and Cliff Nyakeya have extended their stays at 12 time Kenyan champions AFC Leopards.

AFC Leopards in past FKFPL action against Kenya Police

The duo of Jaffari Odenyi Owiti and Cliff Nyakeya have extended their stays at 12 time Kenyan champions AFC Leopards.

Owiti, who joined Leopards from Chemelil Sugar in 2018 , has been out of action for slightly more than a year as he recovered from an anterior cruciate ligament injury and has signed a two year extension.

Nyakeya, who joined on a short term deal from Wazito FC has extended his stay by a year.

Speaking to AFC Leopards media, Nyakeya said, “"I'm  happy to have extended  my stay  at AFC Leopards. Looking  forward  to a  great  pre season  as we prepare  for the new season."

Leopards, who last won the Kenyan title in 1998 will be gunning to end that drought when the new season gets underway on 27 August.