No need for panic as Bryett is rebuilding Thika United 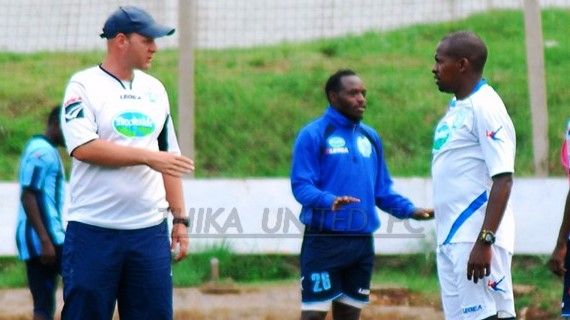 No need for panic as Bryett is rebuilding Thika United

When John Kamau left Thika united at the end of last season to join Posta Rangers, many Thika utd fans (me included) waited in bated breath to see who would replace a man they had come to associate with the teams philosophy of playing good attacking football though sadly with no good results to show.

The management ultimately settled on Tim Bryett, a Briton largely unknown in Kenyan football circles and his only encounter with local football was a three months unsuccessful stint with City Stars, resigning after claims of sabotage by his technical bench.

There was some optimism among the Thika fans that their first "Mzungu " coach will bring in the oomph that the team needed to compete with big teams in the league.

However, Tim had other plans of rebuilding a new team altogether. The team lost big names such as Dirkir glay,Tonny Kizito,David Kingatua and Moses “Dube” Odhiambo.The Briton replaced them with young inexperiecned players such as Ray Omondi and Collins Okumu.

Those signings were the first sign that the coach was looking to build a young team that can grow together over the years and possibly compete for the title in two seasons or so. In the first leg of the season, the team managed 6 wins ,4 draws and suffered five losses.

Interestingly those losses were against experienced teams  ; Gor Mahia, Mathare, Ulinzi Stars, Sofapaka and Bandari.  They say that a result doesn’t always portray the true picture of the game and such was the case in those losses where Thika United played so well but inexperience exposed them.

Now, four matches into the second leg, Thika has again lost three matches in the same fashion. It is disappointing to the Thika United  fans and the young players but it’s important that the management and the fans believe in Tim Bryett and his young charges.

The young players such as Ray Omondi,Jackson Macharia,Michael Mutinda and Collins Okumu have performed exemplary well this season and that should be a reason for some optimism that if this team is kept together for a season or two then it can perform wonders and even challenge for the tittle.

Gor did the same

Thika United is in the stage where current champions Gor Mahia were a few years ago when the team recruited young players such as their current skipper Musa Mohammed,Blackberry and Teddy Akumu. They believed in these young chaps and have now reaped massive benefits: Two league titles and a Top 8 trophy.

Back to Thika, now the challenge is to the coach to keep improving the team to justify the massive faith  that the fans have in him. Thika will drop points but ultimately the fruits of this labour that the team is putting will be enjoyed in a year or two.

Do you have a story you want us to publish? Submit here