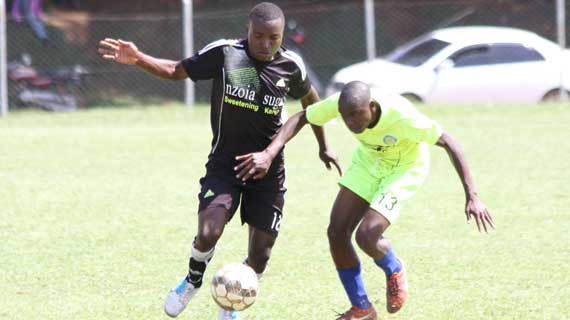 After watching from the stands last weekend , Nzoia United new coach Geoffrey ‘Solo’ Oduor will be out for his first match on Wednesday in Bungoma

Oduor, formerly with Kibera All Stars was appointed to head the team last week and watched from the stands as they lost 3-2 to Mathare United in Nairobi. He believes he has a good squad at his disposal but maintains his maiden and primary target is to ensure the team survives the relegation axe.

Nzoia are placed 12th in the standings with 28 points, seven out of the relegation zone.

“My primary target is to help the team maintain its status in the Premier League and after that we can plan for next season. We need to take the remaining games positively and win as many as we can,” stated Oduor.

He added; “I watched the team against Mathare and I have seen how they play. We have a very good side with good quality players and with training and team work I believe we can achieve our targets.”

Oduor says he is ready for his first challenge in the top tier and believes his experience with Kibera in the National Super League will be enough to sail him comfortably.

“There is always pressure in this job no matter where you are. I believe I am ready for the challenge. I am thankful for this platform as it is a new platform and a new challenge. I am sure I will work well and be successful,” added Oduor