New Chapa Dimba Champions to be crowned in Mombasa 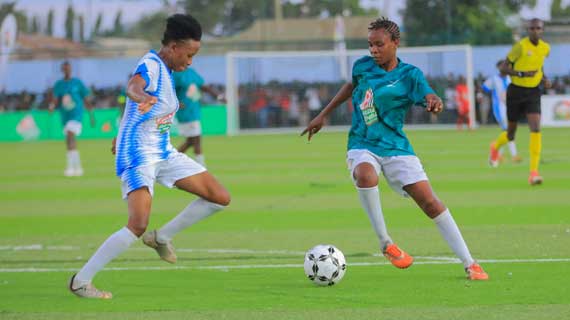 The regional Chapa Dimba Na Safaricom Mombasa finals set for this weekend in Mombasa at the Bomu Stadium , Changamwe

Cynthia Peakey (R) of Changamwe Ladies fight for the ball with Jemin Kahindi of Solwogidi during the Safaricom Chapa Dimba coast region finals held at Bomu Stadium in Changamwe qualified for the finals after beating Solwogidi 1-0.

There will be a new champion this weekend as the Safaricom Grassroots soccer tournament heads to Mombasa for the second regional finals at the Bomu Stadium, Changamwe.

In both the men ad women's editions of the Chapa Dimba Mombasa Regional finals, the reigning  defending champions Shimanzi Youth and Changamwe Starlets have both been bundled out at the preliminary stages and failed to make the cut to the finals set for Saturday and Sunday.

After a competitive preliminary stage that saw 98 teams taking part , four boys and four girls teams will be in the finals to fight for the single slot to the national finals. The regional winners will also each earn themselves KES 200,000 in cash prize.

The second of the scheduled 8 regional finals will begin with coaching and scouting clinics on Thursday and Friday to be attended by over 100 Chapa Dimba coaches from North Eastern, Eastern, Central and Coast regions. The clinics will be conducted by certified LaLiga Coaches and will involve theoretical lectures and on-field sessions.

The players will also be taken through life skills and mentorship sessions on the weekend of the competition before taking to the pitch in the evening.

Garissa's Berlin FC became the first team to book a slot in the national finals after winning the North Eastern Finals  on the first weekend of action in Garissa  after beating Al Ansar 2:0 at the Technical Training College Grounds (TCC) in Garissa in a repeat of last season’s final.

After the regional finals, an all-Star team comprising of 16 girls and 16 boys will be selected to attend a 10-day training camp in Spain during which they will play friendlies against top Spanish La Liga Football Academies.