New Champions to be crowned as Chapa Dimba heads to Nanyuki 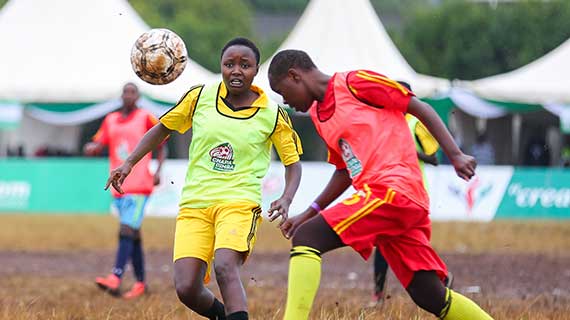 The Safaricom Chapa Dimba soccer Tournaments heads to Nanyuki this weekend where eight teams will be playing for the single slot to the National finals.

After the North Eastern and Coast regional finals, the annual Chapa Dimba Na Safaricom grassroots soccer tournament heads to Central this week where new champions are expected to emerge.

In the Central Region boys competition, new champions will be  crowned after last season’s winners Euronuts from Kiambu were knocked out at the group stage. Barcelona FC from Laikipia, who have since rebranded themselves to Falling Waters, will look to defend their title in the girls’ category after successfully securing a slot for the regional finals.

“We are happy to be back to discover and unearth raw talent through Chapa Dimba na Safaricom, kicking off the year in Nanyuki for the Central regional finals. I urge the fans to turn up in large numbers to be part of the two-day event,” said Naaman Amboka, Chapa Dimba Na Safaricom Central Region Coordinator.

The boys finals will line up Irigiro FC from Maragua, Jysa from Juja, Ulinzi youth from Nanyuki and Kiamutugu boys from Kirinyaga while  Limuru Starlets, Achievers Queens from Ruiru, Falling Waters from Nyahururu and Nyer’s Karima queens make up the girls’ teams.

Winners will walk away with a cash prize of KES 200,000 and an opportunity to represent the Central Region in the national finals. The runners-up will also receive KES 100,000 each with a host of individual prizes to be won.

The players will also attend life skills and mentorship sessions where they will be equipped with the knowledge on how to live life beyond the pitch.