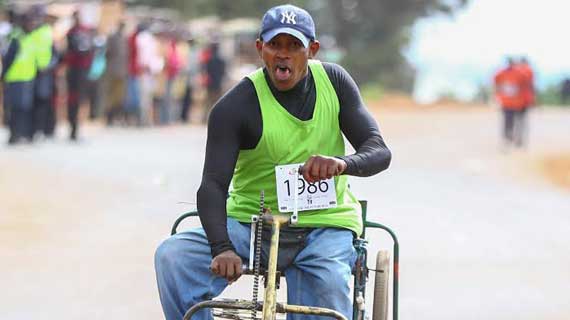 The 11th edition of the Henry Wanyoike Hope For The Future Run was held at Alliance High School in Kikuyu, Kiambu County on Sunday.

Robert Ndiwa won the men’s senior race with a time of 25:19:04 while Pauline Wangui won the women’s race at 28: 16:10. Also awarded a trophy and a certificate were the first and second runners up in the category.

In the junior category sixteen year old James Ngugi clocked at  27:10:03 to emerge the winner while his female counterpart, Susan Wahome won at time of 32:14:95.

An approximated 15,000 runners participated in the competition, which was sponsored by Safaricom to a tune of Ksh 1.5 million and had two categories: 3km children’s and veterans’ run, and 8.5km race for seniors and people living with disabilities.

“We use the event as a platform to promote the rights of disabled people, community integration and also as a platform for nurturing upcoming talent. Each year, we pick a theme that aims to address a social issue in our society and use the race to communicate our agenda,” said Gideon Gachara, the Race Coordinator.

“On the 11th edition of the race, I am pleased to be celebrating the transformation we are driving in Kikuyu. So far we have been able to provide 400 walking sticks for the visually impaired and 100 wheelchairs. We have also built a nursery school in Kanjeru in Kabete Constituency, where we also run a feeding programme for children from poor backgrounds,” said Race Founder Henry Wanyoike.

The funds raised this year will also go towards providing financial support for the education of orphans and vulnerable children.

“Safaricom is proud to be associated with this event because of its dedication to transforming the lives of members of the community, from assisting the physically disabled to supporting education and environmental conservation programmes in schools. The achievements of the race over the last decade are proof that when we come together, great things happen, and we are happy to be a partner on the journey to bringing positive change to our communities,” said Sylvia Mulinge, Director for Consumer Business – Safaricom.

This was the third event in the 2017 Safaricom Athletics Series, which was launched last month and will be sponsored by the telecommunications firm at a cost of KSh.65 million.