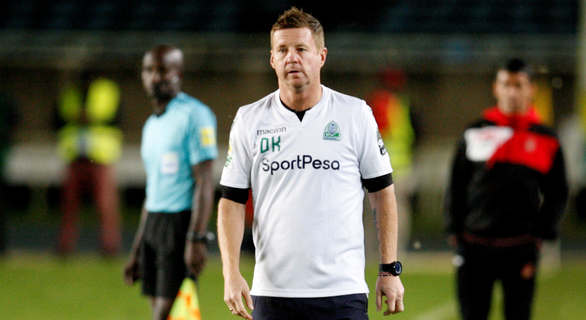 Gor Mahia’s downward spiral continued on Wednesday evening when they lost their second consecutive game, going down 2-0 to Ulinzi Stars at the Kenyatta Stadium in Machakos. Just as was witnessed last Sunday in Thika, Gor had to beg players to show up and only 16 did, travelling to Machakos without training.

And the frustration was evident after the full time whistle with head coach Dylan Kerr saying “It’s not my fault, that’s all I have to say, thank you’ before storming out of the post match briefing.

Gor players have been on a go slow protesting unpaid August salaries as well as match winning bonuses running through to eight games.

Meanwhile at the Thika Sub-County Stadium, Thika United, still with their good feel factor after beating Gor on Sunday sunk deeper into relegation after losing 2-0 to Tusker FC courtesy of Timothy Otieno’s brace.

But it was at the Machakos Stadium that all eyes were fixed with everyone eager to see which Gor Mahia side will turn up. They did turn up, but with 16 players with among the senior players in including Jacques Tuyisenge, Karim Nizigiyimana and Wellington Ochieng.

IT was Ulinzi who had the better start to the match with Ibrahim Shambi’s shot from range going straight into keeper Peter Odhiambo’s arms. Elijah Mwanzia came close when he rounded keeper Odhiambo, but his goal bound shot was blocked on the line by Charles Momanyi.

Odhiambo was called into a brilliant save after 20 minutes when he reacted well to leap to his left and tip out a header from Enosh Ochieng off a cross from the right.

On the opposite end, Gor who had started slow and seemed uninterested had two chances, first Innocent Wafula shooting over the bar from the left after a one two change of passes with Ephraim Guikan while on the second instance, Wafula played Guikan through but his shot went agonizingly wide.

Ulinzi then got into the lead nine minutes from the break when Nandwa had the easiest of tasks tapping the ball home from close range after keeper Odhiambo spilled a shot from Daniel Waweru.

Two minutes after the break, Ulinzi went two up with Nandwa striking his second with a sweet volley after Mwanzia played him through on goal.

Gor made changes, Nizigiyimana and Kevin Omondi coming off for Francis Mustafa and Boniface Omondi, the game lighting up.

Just after coming on, Omondi had a chance at goal with a shot from the right that was saved by keeper Timothy Odhiambo. Gor kept surging and had a Guikan effort come off the upright in the 67th minute.

Ulinzi had a chance to kill off the game after 69 minutes when substitute Masita Masuta missed a sitter after breaking the offside trap, rounding up the keeper, but his shot with a gaping goalmouth came off the post.

On the opposite end, Gor were also kissing the woodwork, this time, Ninnocent Wafula’s header from the edge of the area clipping the crossbar.

Gor pressed particularly with golden boot chaser Jacques Tuyisenge trying in vain to add on his tally of 13 goals, his only shot at goal being late on with the shot going straight to the keeper.