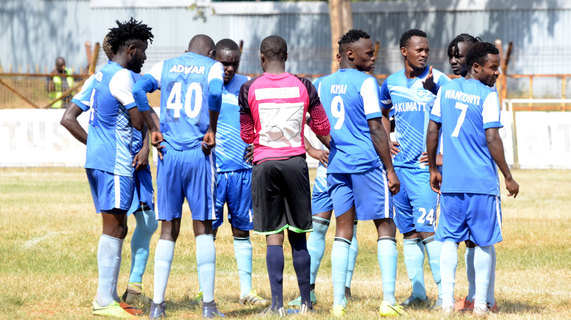 Nakumatt FC will take on either Nairobi Stima or Ushuru FC in the Kenyan premier League relegation and promotion play-off after losing 2-0 to Vihiga United on Sunday, a result that meant they finished the season at 16th place.

Five teams who were in danger of dropping to the play off slot heading into the last day of the season with Vihiga and Nakumatt facing off in what would be the biggest battle. Chemelil Sugar, Posta Rangers and Nzoia Sugar were also in the same boat.

But, on the final match day, Vihiga and Nzoia picked identical 2-0 wins over Nakumatt and AFC Leopards while Posta Rangers drew 0-0 with Kakamega Homeboyz to sneak away.

With the result, Nzoia moved to 13th, with 41 points, Chemelil 14th with 39 while Posta Rangers finished with 38 points at 15th, just one above Nakumatt who slumped to the dreaded position 16.

Nakumatt coach Melis Medo was dejected with the result and blamed it on lack of motivation for his team with the players going without salaries for three months.

“You don’t expect much from players having not been paid for three months. They should earn a trophy as a matter of fact, we showed up fought and did our part. I don’t believe they (Vihiga) were better than us. We just had two mistakes and they scored two goals,” Medo said after the match.

They will now play either Nairobi Stima or Ushuru in the play-off. Ushuru and Nairobi Stima are both on 68 points on the National Super League standings after the penultimate round matches this weekend.

Nairobi Stima were held to a 1-1 draw by Kenya Police while Ushuru beat Nakuru All Stars to narrow the gap. Nairobi has a better goal difference compared to Ushuru and should they both win, Stima go through.

Ushuru will play Bidco United while Stima will play the already promoted KCB. The taxmen will be hoping KCB do them a favor by beating Stima and they win against Bidco to occupy the play-off slot.