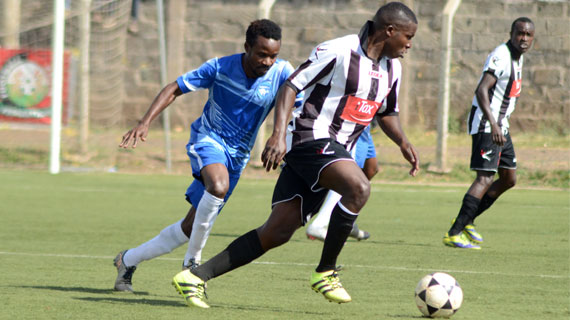 Nakumatt who were the home side will now need any kind of draw from the second leg to be played on October 28 at Kasarani to remain in the league while Ushuru will require a win of more than two goals to bounce back to the top tier after a two-year absence.

It was a game of two halves with Nakumatt controlling the first leg while Ushuru were the better side in the second stanza. Nakumatt, still wallowing in financial difficulty started bright and had a seventh minute chance with Timonah Wanyonyi’s shot from inside the box being saved by the keeper.

In the 18th minute, Nakumatt had another chance but were denied by Ushuru keeper Kennedy Obwanda when off a counter, Wanyonyi cut back the ball for Joe Waithira who saw his shot blocked.

The search for goals yielded fruit in the 21st minute when Adwar struck a superb low freekick from almost 30 yards out after Waithira was fouled by David Otieno.

Three minutes after conceding, Ushuru had a chance to draw back level but keeper Philip Odhiambo punched out Evans Maliachi’s inswinging corner. The rebound fell on the left back again, but his shot from the right came against the side-netting.

Nakumatt continued dictating the tempo of the game and in the 28th minute, Waithira should have punished Luis Masika for losing the ball cheaply on midfield, but his attempt at lobing the ball over an advanced Obwanda in goal was futile.

On the other end, Ushuru had a chance with a free kick from a good scoring range but veteran Oscar Mbugua sent the effort straight to the wall. Four minutes to the break, Ushuru came close but were denied by the upright but Bill Oporia’s shot came off the post.

In the second half, Ken Kenyatta’s men came back an improved side and they were more adventurous offensively. They had a chance in the 66th minute when Benson Amianda poked the ball towards Oscar Mbugua, but the former City Stars man lifted the ball over the bar with only the keeper to beat.

Ten minutes to time, they came very close when a split pass from midfield found an overlapping Maliachi on the left with the wingback striking a superb first time shot on his stronger left foot but it came off the bar.

The taxmen piled the pressure, dumping ball after ball into the Nakumatt box but they couldn’t find the composure to score.