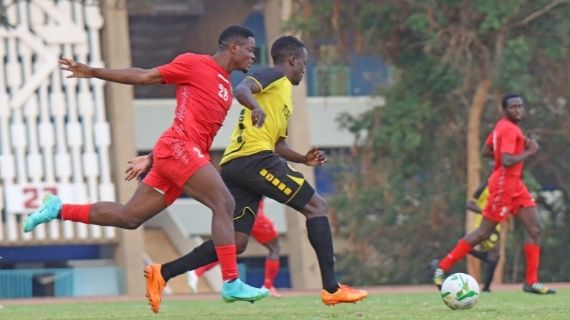 League champions Tusker have completed the signing of  midfielderShami Mwinyi from Kakamega Homeboyz as well as the Kariobangi Sharks duo of goalkeeper Brian Bwire and defender Daniel Sakari.

The three arrive each on two year contracts to bolster the team’s unit ahead of a tough campaign that also includes the CAF Champions League.

Bwire’s arrival will offer immense competition in the goalkeeping department with the club having also signed Matasi from Ethiopian club St. George and the presence of Rwandese number one Emery Mvuyekure.

“I am glad to be joining Tusker because it is a winning team. They have just come from winning the league and that momentum is what we want to keep going and ensure we defend the title. I am also excited at the prospect of playing continental football because that is a big stage,” further said the goalkeeper.

Meanwhile, Sakari believes the move to Tusker will be a positive step in his career.

“This is a positive step in my career because Tusker is a bigger team and comes with a lot of pressure. There is also immense competition in the team and as a footballer, that is what you always want. Where there is competition, you grow and improve. I am ready for the challenge,” said Sakari.

At the same time, Kibwana’s addition to Tusker will be a huge relief especially after losing Henry Meja who joined Swedish side AIK. Kibwana was a lethal goalscorer for Homeboyz last season, scoring 10 goals from midfield position.

His creativity in midfield and prowess moving forward is an ingredient that Tusker will require in their campaign to retain the title.

“I had a good period with Homeboyz last season where I scored goals despite battling injuries all season. I hope to do even better especially if I can avoid injuries. I want to keep scoring goals for Tusker,” he added.