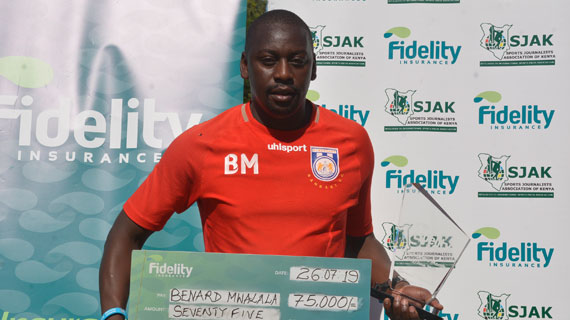 Bandari tactician Bernard Mwalala has been belatedly named the May/June Sports Journalists Association of Kenya (SJAK) Fidelity Insurance coach of the month award winner. Mwalala guided the coastal-based side to five wins and four draws in nine matches played during those final two months of the season.

This is the second time that the youthful tactician has won the coveted prize.

"It is brilliant winning the award twice. We had a tough month because we played nine matches back to back and the other coaches didn’t make it easy and that is what gave me and my team motivation,” Mwalala said as he received his award at the club’s training base in Mbaraki, Mombasa.

Bandari began the month with a 1-0 win over Ulinzi stars before playing to a barren draw with Posta rangers. The Dockers then managed a 2-0 win over Vihiga United followed by a 3-1 victory at home against Chemilil Sugar and a 3-1 win over Tusker FC.

They beat Zoo Kericho 3-0 before picking up back to back 0-0 wins against Mathare United and Sofapaka and wound up their season with a 2-2 draw against his former employers Nzoia Sugar.

Mwalala despite not clinching the KPL title, guided Bandari to a second spot finish and victory n the Football Kenya Federation Shield title.

The dockers are currently in pre-season ahead of the new campaign with their journey starting on August 9 when they play Sudanese club Al Ahly Shandy in the first leg of the CAF Confederations Cup preliminary round.