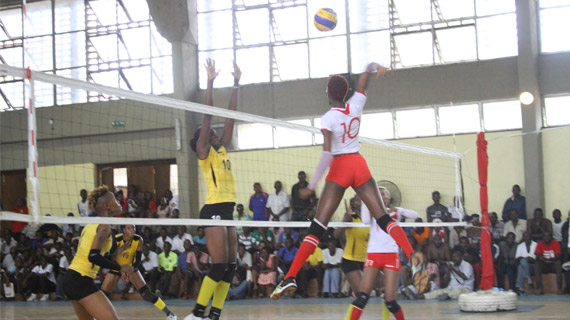 Kenya Pipeline middle blocker Trizah Atuka has termed their playoffs match against close rivals Kenya Prisons as the match of the season saying it had all characteristics of a true continental final, ending a competitive season with entertaining volleyball.

Trailing the five times national champions 1-2, Pipeline held their nerves to stage a brilliant comeback in the third set, overturning a five points’ deficit to cruise past Prison who had a better advantage to win the match in the third set.Prison won the title after their 3-2 win over Prisons having also defeated KCB and Nairobi Water in earlier matches at th playoffs.

“Qualities of true champions, I give credit to my team mates as they were amazing. Holding on strong and exposing the best mental focus to beat a strongly paraded team like Prisons deserves a lot of admiration.” She said.

“This was one of those most difficult but exciting matches I have played in and we return our thanks to God, fans, technical bench and the team sponsors who have given us the best.” She adds.

Atuka’s brilliance throughout the season and the three days’ tournament at the Makande Hall earned her the Most Valuable Player title announced during a post playoffs Gala night held in Mombasa on Sunday night.

“I put in my best but to be honest I did not expect to be named the MVP because I think we had a lot of amazing talents out there. I thank God for this trophy and my team mates for an amazing experience. It has been a fine season and retaining our title is one of the best gifts for every member of the team especially the technical bench who push us to our limits in pursuit for good results.” She added.