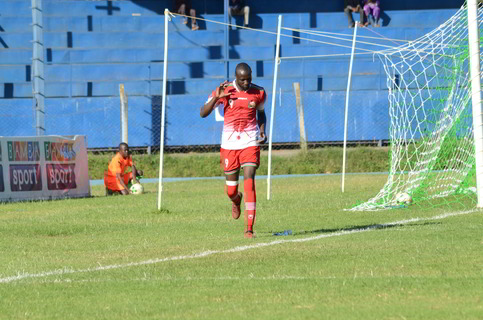 Substitute Ovela Ochieng made all the difference bringing in a second-half impact, providing the assist that Mutamba duly put into the net. Stars would have seen all the hard work undone in the final minute when Fernando Ru da Garcia headed in from a corner, but the effort came off the bar.

Stars had an improved performance from last Friday’s 1-0 loss to Swaziland with Migne making four changes to his squad. Mutamba started in attack having come off the bench in the Swaziland tie while Musa Mohammed skippered the side in defence ahead of Mike Kibwage.

Matasi started in goal ahead of Boniface Oluoch while Kenneth Muguna, the only foreign-based player in the squad played behind Mutamba in attack having started ahead of Patillah Omotto who didn’t make the matchday squad.

It was the visitors who threatened first, Valeriano Nchama forcing a point-blank save off Patrick Matasi in the 10th minute when he connected to a Nicolas Kata Senga corner.

Stars also had their first chance off a set piece when Joackins Atudo’s header from a Francis Kahata corner was cleared off the line by Frederico Ondo.

Atudo was at the heart of another set-piece when he headed the ball to the edge of the six-yard box from the far post, but there was no one to finish off.

In the second half, Migne started off by pulling out Muguna for Ovella Ochieng and the Kariobangi Sharks man went into duty immediately with his pace and trickery on the ball. His influence brought in the needed impact in the 73rd minute when he took on a daunting run on the right before delivering a low cross into the box that was tapped home by Mutamba.

He came close again minutes later this time from a freekick on the right which went inches wide. Stars had to make a second change with Mohammed coming off injured and his place taken by Kibwage.

A lapse of concentration saw De Garcia outleap his markers at the back post to connect to a freekick from Bicoro Akieme, but it came off the bar and Stars cleared in earnest.