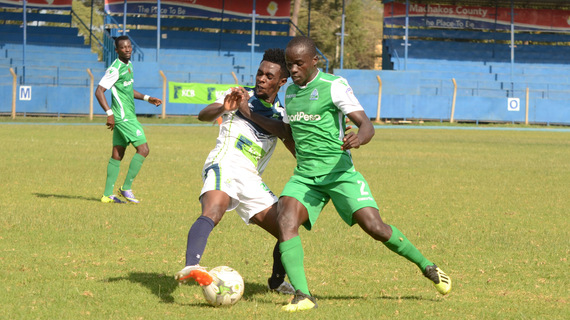 Francis Mustafa struck with virtually the last kick of the game as league leaders Gor Mahia came from 3-0 down to play to a 3-3 draw with KCB at the Kenyatta Stadium in Machakos on Thursday. Gor had gone 3-0 down with a brilliant brace from Bolton Omwenga after Martin Nderitu had broken the deadlock.

Gor however fought back with Samuel Onyango and Harun Shakava scoring to give them a 3-2 scoreline before the break.

The bankers who beat K’Ogalo 1-0 in the first leg were in some mood to complete a double over the reigning champions and they showed their hunger scoring three goals within 10 minutes, much to the shock of the entire Gor bench.

Nderitu opened the scoring in the 24th minute, when he made the most of a half hearted clearance from Harun Shakava, picking the ball and racing clear on goal to beat Shabaan Odhoji.

Four minutes later, KCB were 2-0 up when Omwenga stood over a freekick from 35 yards out, before striking it superbly beyond Odhoji. He then doubled his tally and made it 3-0 for the bankers with a superb contender for goal of the season.

The left back noticed Odhoji yards off his line and went for goal from the halfway line, the ball dipping in behind the keeper.

But, a mistake from KCB keeper Zamu Adisa gave K’Ogalo a way back when the keeper failed to go for a corner kick and Shakava headed it into the net. Immediately after scoring, Gor made changes, coach Hassan Oktay pulling out Erisa Ssekisambu and Hashim Ssempala for Dennis Oliech and Boniface Omondi.

Immediately the changes were effected, Gor started playing more like a team.

Six minutes to the break, Adisa was called into a save punching away a low shot from Onyango who had been set up by Oliech. Three minutes later, Rwandese international Gabriel Mugabo cleared off the line after Francis Mustafa’s effort from a tight angle beat the keeper.

Gor however scored at the stroke of half time when from a corner started short, Onyango swung in a curling effort that found Adisa off balance.

In the second half, Gor went on the offensive, seeing that an opportunity to get back into the game and possibly get a winner was well within their reach. They should have gone level just five minutes in but Onyango couldn’t get a strong connection to an Omondi cross.

Gor kept the search, pressed the bankers in their own half and sought an equalizer. Mustafa came close on the hour mark but his shot from the edge of the box was deflected and missed the target by a whisker.

In the 75th minute, they should have drawn level when keeper Adisa gifted Mustafa with an easy spill off a Tuyisenge cross, but the Burundian forward’s header wasn’t strong enough towards goal.

The pressure bore fruit when Mustafa swung a volley into the net after KCB struggled to clear a long ball from Joash Onyango.