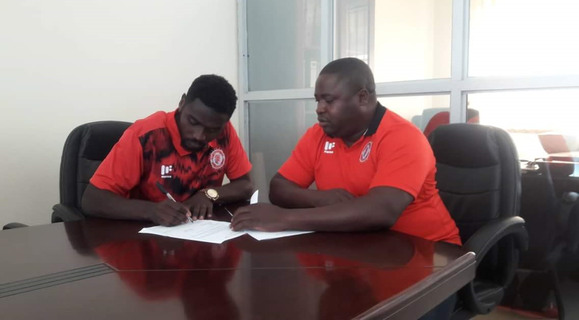 Harambee Stars defender Musa Mohammed has joined Zambia Premier League side Nkana on a two year deal, signing the contract on Monday afternoon at the club’s base in Kitwe. Meanwhile, former Tusker FC defender Eugene Asike is set to join Kabwe Warriors after travelling to their base to conclude talks.

Mohammed has been a free agent since leaving Albanian second division side KF Tirana after just four months at the club. The defender who captained Harambee Stars to the CECAFA Senior Challenge title last year had been of interest to several Kenyan clubs as well.

“Yes, I have been here for the past few days and today we concluded the contract talks and I signed. I have trained with them and I really like it here. It is a big club with big ambitions just like Gor Mahia and it will not be hard for me to fit in,” the defender said from his base in Kitwe.

The defender’s move now brings the number of Kenyan players in the FAZ league to nine and might rise to 10 or 11 in the next few days. Apart from Asike, KPL top scorer Elvis Rupia is also rumored to be headed to Zambia with Power Dynamos.

Mohammed joins the Zesco United trio of Jesse Were, David Owino and Jesse Were as well as John Mark Makwatta and Clifton Miheso who play at Buildcon. Andrew Tololwa and Ian Otieno turn out for for Red Arrows while Ismail Dunga is in the books of Napsa Stars.