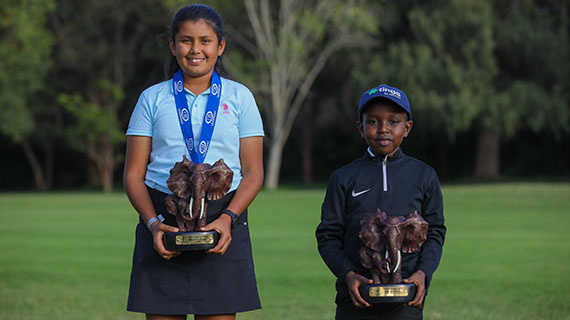 Speaking to michezoafrika.com after the 7th leg in Karen, Junior Golf Foundation President Regina Gachora noted how the partnership with Safaricom has supported increased participation of juniors especially noting a great surge in girls’ registration.

9-year-old Muriithi Gatu and 12-year-old Rohini Shah are the winners of the 7th leg of the Safaricom Junior Golf series held at the Par 72 Karen Country Club last weekend.

Gatu, a grade four pupil at Thika Road Christian School, carded a splendid gross of 39 points in a nine-hole tournament to book a slot to the Grande Final in Vipingo while Shah too home the overall crown after scoring 77 points in a tournament that attracted 136 junior golfers from Nairobi and its environs.

Speaking after her win Rohini Sha said "I liked the experience today as it was pretty unique playing with many different junior golfers. I appreciate Safaricom and US Kids for organizing such a fantastic junior event. My game today was one of the best."

Winning the Boys 15-18 title was Asa Dinkins with a gross of 81 points ahead of Dhruv Kavia, who scored 87 points. In the Girls 15 and over category was Antonia Mbuthia with 103 points.

Playing in the Boys' category 13-14 years, Nathan Caralon produced an impressive gross of 82 points to lead his group after a play-off with Junaid Manji, who had also garnered 82 points. In the Girls' category, 13-14 years, Maryam Mwakitawa scored 86 points ahead of his closest challenger Navya Nagda who finished second with 123 points.

Elsewhere Justin Ngeera continued to dominate the 11 years Boys' category after scoring a gross of 85 points leading his team of twelve contestants.

In the 9- 10 years old Girls category, Kanana Muthomi posted outstanding performance at the course to emerge the best girl with 44 points ahead of Nyawira Macharia and Wamaitha Waithaka, who took second and third place with 50 and 54 points, respectively.

Other top scorers were Ashley Gachora in the Girls 8 and Under category with 44 points and Jeff Kibe in the Boys 7 years category with 59 points.

Speaking to michezoafrika.com after the 7th leg in Karen, Junior Golf Foundation President Regina Gachora noted how the partnership with Safaricom has supported increased participation of juniors especially noting a great surge in girls’ registration.

“This year, Safaricom has given us Kshs.12 million which is in an amazing opportunity for us to put together 25 tournaments across the country.” Regina said.

“What happened before is we did not have enough tournaments and therefore the young players were not getting chances to compete against themselves. When the young are given more opportunities to play, they become better.” She added.

The Karen Leg of the Safaricom Tour was one of the 7 legs of  the US Kids Tour  where the best two players from the 7 legs will get a chance to  compete amongst some of the finest upcoming players in the world including playing in South Africa , Scotland and the world Championships.

After Karen, the tournament heads to Nyali Golf & Country Club in Mombasa on Saturday 21st and Sunday 22nd May 2022.