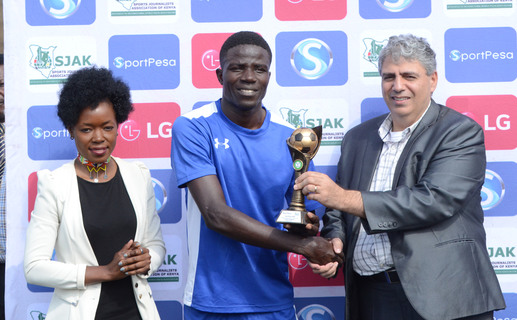 Mukhekhe who scored three goals and three assists in May managed 21 votes beating Aswani with 19 while Juma had 11.

“I have just been hearing about this award but today I have witnessed it. I am so excited and I am happy to receive it. I thank my teammates and coaches for the support and hopefully we continue with the good work,” Mukhekhe said as he received his award at City Stadium on Wednesday.

Mukhelhe arrived from GFE 105 at the beginning of the season playing as a midfielder, but after watching him for several games, coach Melis Medo converted him to a right wingback. It is from this position that his goals and assists have come from.

“He is a great player; he listens, he works hard… his work load is fantastic. He has been doing good playing from right back to right midfield to winger and I am happy for him. We all are,” the coach said of him.

With the award, Mukhekhe went home with a 49-inch LG Television and a cash reward of Sh100,000 while his teammates will receive a reward of Sh50,000.

Mukhekhe now hopes his form can help the team finish the season in the top five.