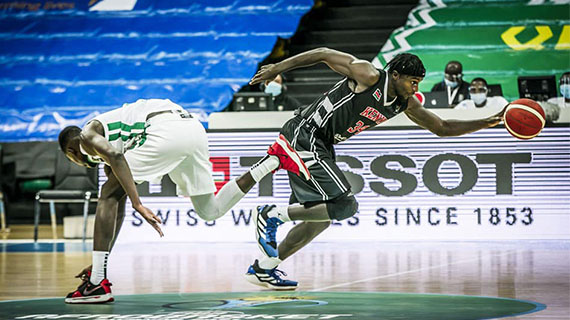 Morans started the second quarter on a slow note, conceding 13 points straight (32-19) and grabbed a basket before tactician Cliff Owuor called them to the bench.

Valentine Nyakinda in action at the Kigali Arena on Wednesday, November 25./ Courtesy.

The national men’s basketball team blew off the blazing energies of the first quarter in their tie against Senegal and lost the match 92-54 in the Afrobasket 2021 Qualifiers on Wednesday evening.

If it were a musical performance, we’d say the Eric Mutoro-skippered Morans started the gig in the dying minutes of the presentation.

They got rolling well and sustained the fast tempo in the opening quarter, dipped in the second, picked up in the third and completely died off in the fourth in terms of both entertainment and point delivery.

Kenya drew the first blood but soon it became a give-and-take affair, exchanging leads from time-to-time and eventually shared spoils (19-19) at the end of the opening quarter.

Morans started the second quarter on a slow note, conceding 13 points straight (32-19) and grabbed a basket before tactician Cliff Owuor called them to the bench. Tylor Okari Ongwae and Desmond Owili took the leadership in narrowing the gap to six points (39-33) but easy mistakes and missed opportunities at the ring cost the team.

The period, marked with poor defense by the Kenyan side and an entertaining show from their opponents ended on a 28-14 score line in favour of Boniface Ndong-tutored Senegal for 47-33 at the break.

The Kenyan lads reduced the gap to 10 points upon resumption at 51-41 and maintained the margin. With 60 seconds remaining, Ariel Okall scored from the distance and Valentine Nyakinda slotted a basket for Kenya to inch closer to the West Africans. The quarter ended 11-19 for a cumulative score of 58-52.

A foul committed by Nyakinda marked the beginning of things going down south for Kenya in the last quarter. The fourth period was terrible for the Kenya outfit who had donned black and red jerseys.

Everything failed. Morans fell short in shooting, defense, rebounding, there were lots of turnovers in favour of Senegal who were keen on rebounds and grabbed several steals. With four minutes to the buzzer, Kenya had only sunk one basket while Senegal were on a scoring spree, leading 75-54.

The status quo was maintained and when the buzzer went off, the Senegalese side had whitewashed Kenya with 34 points to two, winning the game 92-54.