Morans cornered, set for a must win tie against Mozambique 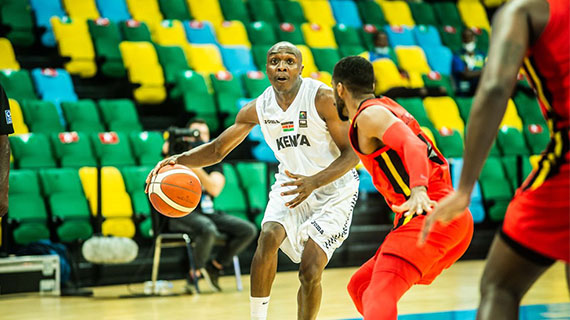 Morans will on Friday play Mozambique in a do-or-die duel for them to secure a ticket to the 2021 Afrobasket showpiece scheduled for February at the same venue.

Eric Mutoro in action against Angola at the Afrobasket 2021 Qualifiers at the Kigali Arena on Thursday, November 26/ Photo by FIBA

Kenya men’s basketball team’s chances of returning to the continental stage after 27 years continued to diminish following their 66-83 loss to Angola in the ongoing Afrobasket 2021 Qualifiers at the Kigali Arena on Thursday.

Morans will on Friday play Mozambique in a do-or-die duel for them to secure a ticket to the 2021 Afrobasket showpiece scheduled for February at the same venue.

The match, technically a knockout faceoff, both Kenya and Mozambique must bring out their best display.

“We are not out of the fight yet. Our aim is to qualify and we are going to give it our all, it is our final match,” noted team captain Eric Mutoro.

But even with the beating, Mutoro and Tylor Ongwae combined for 36 points, scoring 18 apiece while the third best scorer was Angolan Olimpio Cipriano (17).

Mutoro was the most effective player in the East African’s camp as Abou Bakar Gakou delivered better than the Kenyan soldier.

In the meantime, as opposed to their first faceoff, the highlight of the game for Kenya was the fourth quarter where the boys turned tables to win 28-15. However, they woke up too late and this performance only served to reduce the 30-point difference down to 17.

“We tried to execute what did not work well for us in our first match but it is only that we did that late in the game- after Angola had taken the lead. We are still hopeful that if we put our game plan into practice, we’ll get good results,” said Mutoro.

The coach who slowed affairs by called for a timeout when Morans had caught momentum (favouring the opponents) said:

“We did a great job. There are lots of positive things that happened in that game. And speaking of an experienced side like Angola, you cannot afford to make mistakes because they are going to punish you. But I give the boys credit for cutting the points from 30 to 17- that was good.”

The tactician admitted that he has been making do with make-shift point guards and thinks Morans will be ready to roar with the availability of late inclusion Griffin Ligare.