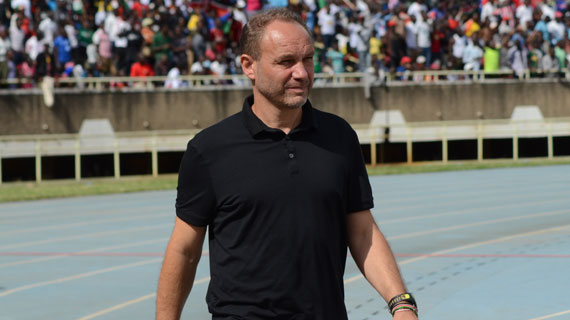 Harambee Stars coach Sebastien Migne has insisted that players who failed to report to national team duty due to injury should have reported for assessment by the national team doctor. Migne who took no questions at his post-match press conference after the win against Ghana said that was a lack of respect and wants better next time.

Victor Wanyama, George Odhiambo, Allan Wanga and Boniface Oluoch were all called up but did not report to camp. Wanyama has just returned back to training from a month long injury lay off and had asked to be excluded from the game.

“I have full confidence with Victor Wanyama but I need to check. If we want to achieve at the high level we need to improve a lot of things and I don’t want to speak about Boniface Oluoch or Allan Wanga; I think it was a lack of respect,” the coach said.

He was also disappointed that Stars’ training sessions at the Kasarani Stadium were limited while visiting Cameroon who had put up a week-long camp in Kenya were given more time to train at Kasarani.

Last Wednesday, the tactician lamented about the Kenya School of Monetary Studies pitch saying it was bumpy and not a good surface to train for the national team.

“When I saw Cameroon have training in this field (Kasarani) and not us who we were at the Kenya School of Monetary Studies, I was not happy” the tactician said of his side’s failure to train consistently at Kasarani.” The coach said.