Migne finally jets out to link up with Harambee Stars 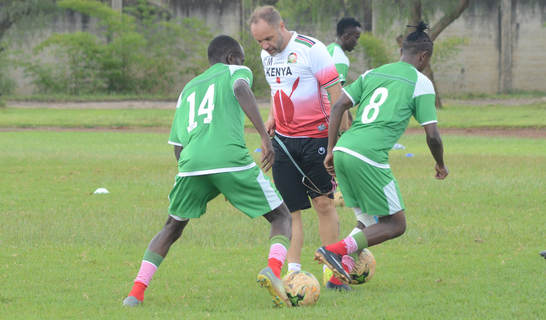 Harambee Stars head coach Sebastian Migne and his assistants finally jetted out of Kenya to link up with Harambee Stars squad in India, a day before the start of the Hero Intercontinental Cup tournament .

Migne and his assistant Nicolas Bourriquet-cor, Goalkeeper trainer Guilaune Coffey and Osteopath Ludovic Breul were delayed in Nairobi due to visa requirements for French Citizens.

The first contingent of Harambee Stars jetted out on Wednesday with Coach Francis Kimanzi holding brief for Migne. Thika United defender Dennis Odhiambo and his Vihiga United’s Bernard Ochieng joined Migne in the flight to India.

Harambee Stars open their quest with a match against New Zealand on June 2, 2018, before taking on hosts India on June 4, 2018 then a third match against Chinese Taipei on June 8, 2018.

Migne will miss the services of Gor Mahia players and several AFC Leopards members as they are involved in the SportPesa Super Cup.

In his two matches in charge, Migne has registered a win and a loss. Stars lost 1-0 to Swaziland then beat Equatorial Guinea 1-0 at Machakos Stadium.